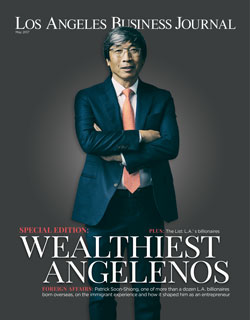 Editor’s Letter
It used to be that Los Angeles was a place that everyone came to but no one was from. And while it is true that in the course of daily conversation you find more and more native Angelenos, it is also true that the region remains a magnet. Who comes? Strivers, opportunists, grinders. They trim our lawns, attend our graduate schools, and are drawn by all the industrial clusters Los Angeles possesses. On our list of Wealthiest Angelenos, for the first time expanded to include everyone in town with a net worth of $1 billion or more, 15 – a full quarter of the expanded list – were born overseas. That includes the two wealthiest people in town, South Africa natives Patrick Soon-Shiong and Elon Musk. In breaking out our annual special report on the Wealthiest Angelenos into a standalone magazine, we strove to offer readers more than just a look at wealth in Los Angeles. In a region where more than 220 languages are spoken, we believed it was time to look at what L.A. offers immigrants, what feeds their entrepreneurial spirit. We expect you’ll find this an enlightening look at both wealth in Los Angeles and the culture that nurtures it.

This list was published May 15, 2017, and the information is current as of that date.

From the magazine:
Immigrants Brought Roots of Success
Taking Risks in New Home
Leaving Old World Behind
Wealthiest Angelenos Ranked by Net Worth