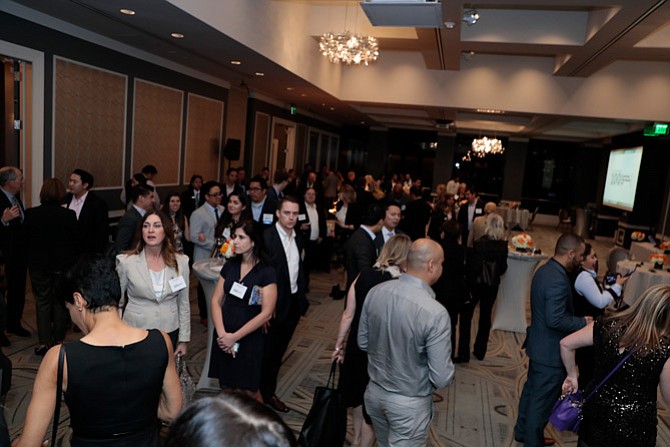 Representatives of companies recognized for the Fastest Growing Private Companies list in Century City at event.

Digital media businesses dominated the highest rankings of the Business Journal’s annual list of fastest-growing private companies this year, but a not-so-old fashioned ice cream maker came out on top.

The average revenue increase among the 100 L.A. County companies on the Business Journal’s list as ranked by growth over that period was 314 percent. Revenue growth for the top five fastest-growing companies averaged 3,700 percent.

Halo Top was the clear leader.

“It’s mind-boggling how much they’ve grown, particularly for a consumer product company,” said Lloyd Greif, chief executive of downtown’s Greif & Co., an investment banking firm that does not have a stake in Halo Top.

“Everyone wants to eat ice cream but not expand their waistlines,” Greif said. “So he (Woolverton) saw a void in the market, addressed it and met a very receptive audience. Coupled with an aggressive marketing strategy and the winning combination of ‘healthy and tastes good enough,’ it worked.”

The food company was followed on the list by Westlake-based Idea Farmer, a creative agency specializing in developing and distributing branded content. The company’s revenue grew by more than 5,100 percent from $200,000 in 2014 to $10.1 million last year.

No. 3 is Sawtelle-based Greenspire, a home energy technology company that raked in $41 million in revenue in 2016 compared to $1.2 million in 2014. The company jumped from No. 12 on last year’s list, making it the highest ranked returning company.

The 100 companies on the list cumulatively accounted for $3.5 billion in revenue for fiscal year 2016, employed 8,018 people in L.A. County and counted 26,064 employees overall.

The strong presence of digital media firms among the top spots is a reflection of the region’s overall trend, analysts said.

“We’re seeing a convergence of creative companies because we are the entertainment capital of the world,” said Chris Rico, director of innovation at Los Angeles County Economic Development Corp.

Rico said that while the digital media landscape is a small segment of the larger entertainment sector, it’s also the fastest growing.

“The emerging ecosystem of digital media companies is a natural for Los Angeles,” he said. “We have a competitive labor force, vast creative infrastructure and resources in this space that is incomparable.”

A 2017 report by Westchester-based Otis College of Art and Design and the LAEDC pegged the creative economy in the L.A. region, including Orange County, as a $190 billion industry.

Some challenges, LAEDC’s Rico contends, would be keeping talent here, but with the launch of the Entertainment and Digital Media Industry Cluster Development last month, the non-profit plans to bring stakeholders together and identify emerging opportunities and resources. Another upside of keeping talent here is the affordability in the cost of living compared to Silicon Valley, he said.

While the top of the list is digital-media heavy, it includes companies in a variety of industries, such as manufacturing, technology, biosciences, food production, construction and health care.

No. 32 Matt Construction Corp. saw the largest revenue growth by dollar value on the list, with 2016 revenue up by 173 percent to $537 million compared to $197 million in 2014. The family-owned company based in Santa Fe Springs was founded in 1991 by Chief Executive Steve Matt and two family members. Matt said 2016 was the first time the company’s revenue had topped pre-recession levels of about $400 million.

“The majority makeup of our clients is the same, which is mostly commercial and institutional, but what is new lately is that we’ve being securing orders for high-rise residential work,” he said.

That, together with a better economy, has spurred growth, he added. The company counts 219 employees on its payroll.