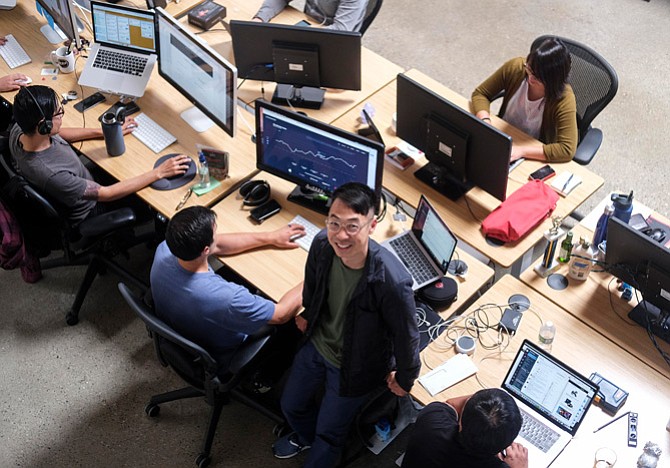 Their El Segundo start-up now ranks No. 4 on the Business Journal’s list of fastest-growing private companies in Los Angeles County. Its revenue ballooned 1,900 percent from 2014 through 2016, rising from $300,000 to $5 million.

“We’re very much like an emerging tech company, with product development for such companies as Walmart (Stores Inc.), the United Nations and Sony (Corp.),” said Chen, its 30-year-old co-founder. “Our team is composed of engineers, designers and makers – people that build things.

“We can adapt very quickly. Everybody is looking to innovate.”

Self-funded Fishermen Labs specializes in mobile app and website development and digital marketing, with an emphasis on virtual reality and augmented reality platforms.

It was rated this spring among the top web designers in Los Angeles in a survey taken by Clutch.co, a business-to-business research company based in Washington, D.C.

“Fishermen Labs has consistently been a leader in our research on L.A. web design agencies,” Clutch analyst and business manager Eleonora Israele, whose firm interviewed 16 Fishermen clients, said in an email. “All of their clients gave them a perfect 5-star review, further showing their focus on client satisfaction.”

The company has 47 techies spread between Silicon Beach, Dallas and Krakow, and is expected to hit $7 million in sales this year, Chen said.

Its name alludes to the apostles of Christ, more than half of whom were fishermen. Its genesis was in Reality L.A. church in Hollywood.

That’s where Chen – who was raised outside Washington, D.C., and founded a hedge fund called Lightmark Capital while in college at Emory University in Atlanta – met Hu, a gaming guru born in China and brought up in Los Angeles.

And they strove to create a corporate culture of high intelligence and high-quality tech, from inception to problem solving to build-to-launch, Chen said. Services range from R&D to return-on-investment products.

The Polish team of 22 designers develops virtual and augmented reality products such as “Ghostbusters,” a mobile VR game by Sony, and “Resident Evil,” a videogame by Capcom Co. Ltd., as well as a virtual reality shopping experience by Walmart.

American teams in El Segundo and Dallas last year helped make over the United Nations’ website – tailoring its message for 70 different countries and a Babylon of languages.

Only one employee in four years has given notice, he said, a rare lack of turnover in tech.

“We’d like to continue growing,” Chen said. “We want to have a key role in the tech landscape of Los Angeles.”