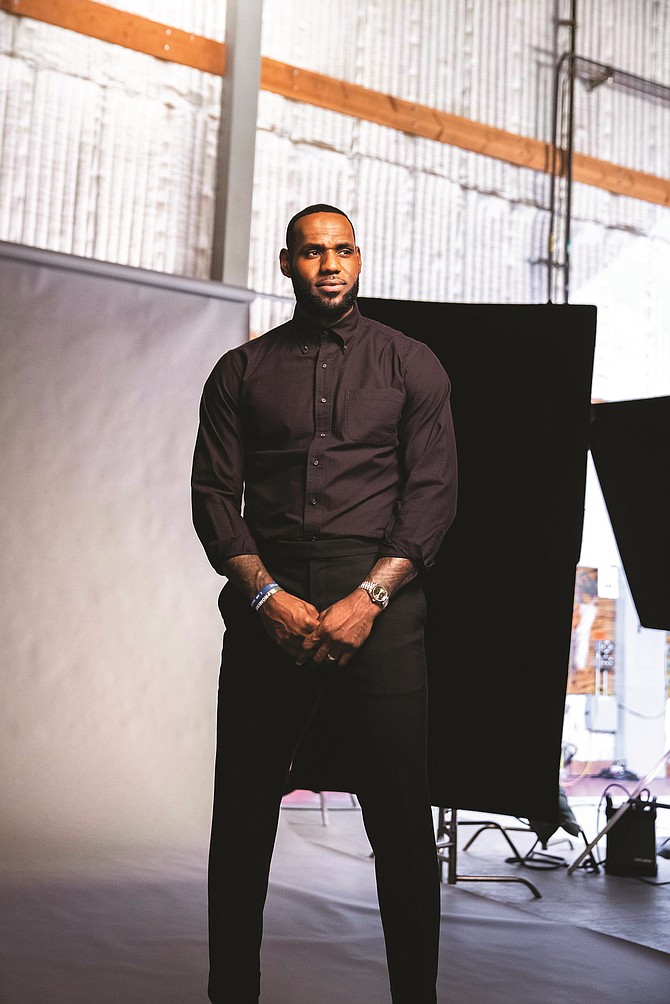 LeBron James looks to match his NBA success off the court.

LeBron James is about to find out if he can add more brawn than bravado to his already prolific business portfolio.

Even as the 35-year-old NBA superstar this week puts an end to the Los Angeles Lakers’ unfathomable six-year playoff drought — and begins his pursuit of a fourth National Basketball Association championship — James’ off-court efforts are intensifying.

The Most Valuable Player candidate who orchestrated a critical off-season acquisition of star big man Anthony Davis — both are represented by agent and James confidante Rich Paul — could see postseason success connect with streams of global commerce.

What’s good for the Lakers is even better for SpringHill Co. In the past few months, the media company received $100 million in funding from the likes of Guggenheim Investments and SC.Holdings and signed a two-year development deal with Walt Disney Co.’s ABC Studios.

It’s all part of the master plan for James and partner Maverick Carter, who launched SpringHill in 2007 with a mission to “empower greatness in every individual, from creators to consumers … by creating the most culturally inspired brands, entertainment and products.”

Although James’ beard is showing patches of gray, he’s uniquely at the top of his game as both an athlete and a global entertainment icon. Forbes ranked James in the Top 10 of the world’s most powerful and highest-paid celebrities — not just athletes — with an annual income of $88 million in 2020.

As SpringHill’s chairman, James has final approval on everything from documentaries to feature films, TV reality shows to scripted dramas. He’s flexing his media muscle unlike any other athlete, and he still draws a salary and endorsement income for his on-court performance.

“If other athletes haven’t realized that someone like LeBron isn’t already the king of basketball, he’s become the king of media for basketball — he continues to understand and control how his presence exists in the media,” said Dan Durbin, director of the Annenberg Institute of Sports, Media and Society at USC.

“You start with the premise that sports as it exists today is media content because a vast majority consume it that way. Athletes recognize their value is so high that if they control their own media presence, they can make significant cash that warps anything they can make as endorsers, so it is a very smart idea to control your own media content distribution.”

The Lakers superstar has provided the template, or at least inspired many others to give it a shot.

James, who bypassed college and went straight to the NBA as the No. 1 overall draft pick in 2003, could provide a thesis topic for an MBA student on how to win games, achieve fame and influence the economy.

With more than 65 million followers on Instagram, 43 million-plus on Twitter and nearly 24 million on Facebook, James finds that anything he has to say on any subject has a built-in audience.

During the NBA’s restart, James continues to be outspoken on social issues, calling for the arrest of the Louisville police officers who shot Breonna Taylor, offering pointed thoughts on the Black Lives Matter movement, saluting the late Rep. John Lewis for his activism and taking pointed jabs at the sitting president.

Leading into the November election, James has also spearheaded a new voting rights group called More Than A Vote.

“It’s a big moment for us as Americans — we want better, we want change, and we have an opportunity to do that,” James said.

Translating that to his media ventures, James launched an athlete-driven discussion show called “The Shop” in 2014 on his digital media platform Uninterrupted. HBO picked up the series in 2018 and began taping it in L.A. to capture the essence of unfiltered conversation that frequently breaks out at an African American barber shop.

“The barbershop may be the last bastion of free speech, and LeBron is carrying that over as a response to some who say he and other athletes shouldn’t be commenting on social things,” Durbin said. “Instead he’s creating a space for this and where athletes can have meaning behind what they want to say. It’s a great idea. Yes, it promotes LeBron, it promotes his perspective and his celebrity, and drives financial capital, but that’s not the single goal.”

Business partner Carter’s voice has also come to light on the HBO show. It’s part of James’ halo effect. His agent, Paul, was recently named to the board at Beverly Hills-based United Talent Agency. Paul founded Klutch Sports Group in 2012. UTA recently invested in Klutch, and Paul serves as head of UTA Sports.

Other SpringHill projects include “Self Made: Inspired by the Life of Madam C.J. Walker,” a series with Octavia Spencer, and “Hustle,” a film starring Adam Sandler for Netflix; the documentary “What’s My Name: Muhammad Ali,” distributed by HBO; and the game show “The Wall” for NBC.

Before James starts his ABC development deal, he also has one more project to finish for Warner Bros.: a sequel to the kid-friendly 1996 hit “Space Jam” that starred NBA legend Michael Jordan.

James is taking over as the star and co-producer of “Space Jam: A New Legacy.” Filming was completed in September, and the animation process has gone on as scheduled despite the Covid-19 pandemic. The film is scheduled for release in July 2021.

James’ Hollywood stats are almost as impressive as his basketball numbers. His IMDb profile lists 32 producer and 12 acting credits. In the NBA, meanwhile, he will lead the NBA in assists for the first time in his 17-year NBA career. He’s No. 3 on the league’s all-time scoring list, recently passing Kobe Bryant, and is within reach of No. 1 Kareem Abdul-Jabbar. James is the only NBA player in the career Top 10 list for both points and assists.

“The thing that’s always impressed me is how he’s always managed not to take a fee for what he does, but he takes a share of it instead and invests himself in it,” said Tim Harris, the Lakers’ chief operating officer and president of business operations.

“The other thing is — how does he play basketball for the Lakers and still have these other things? I want to know how he finds more than 24 hours in a day to get all this done.”