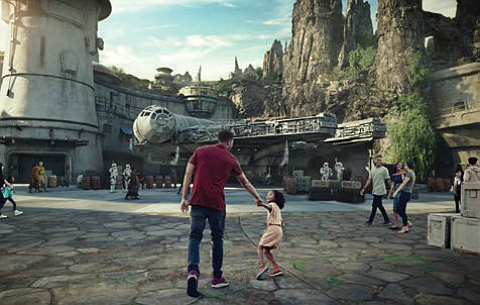 Think about all the times dad took you to Disneyland when you were a kid. If he is a Star Wars fan, perhaps it’s time to return the favor.

Star Wars: Galaxy’s Edge, the epic new land inside Disneyland Park, opened last week and it invites guests to live their own Star Wars adventures as they explore a remote planet full of unique sights, sounds, smells, tastes and other immersive experiences. It’s the largest and most technologically advanced single-themed land expansion ever in a Disney park.

Guests are transported to a galaxy far, far away in Star Wars: Galaxy’s Edge, on a journey to Batuu, the newest location in a story that began in 1977 with the first Star Wars film. Guests will become part of the story as they sample galactic food and beverages, enter an intriguing collection of merchant shops and take the controls of the most famous ship in the galaxy aboard Millennium Falcon: Smugglers Run.

Stepping into their own Star Wars adventures, guests will become part of the action as it unfolds around them, and their interactions with the Play Disney Parks mobile app will deepen their engagement with the land. They may choose to aid a smuggler, join the Resistance or pledge their loyalty to the First Order. This depth of storytelling is part of the total immersion that distinguishes the 14-acre Star Wars: Galaxy’s Edge from any other themed lands in Disney history.

The new lands build off decades of collaboration between Walt Disney Imagineering and Lucasfilm Ltd., a global leader in film, television and digital entertainment production, including the Star Wars franchise. The work on Star Wars between these two creative powerhouses dates back to 1987, when the groundbreaking Star Tours attraction opened at Disneyland.

Reservations are required to enter Star Wars: Galaxy’s Edge at Disneyland Park through June 23. Guests visiting during this time will need valid theme park admission and a reservation to enter the new land. After June 23, reservations will no longer be required to visit Star Wars: Galaxy’s Edge. As needed, Disneyland Resort will implement a virtual queuing system to visit the new land so guests can enjoy the rest of the resort while waiting to visit Batuu.

For more than four decades, fans of Star Wars films have imagined what it would be like to blast across the stars inside the Millennium Falcon or race through the halls of a Star Destroyer. Star Wars: Galaxy’s Edge will feature two signature attractions that turn those dreams into reality.

In Millennium Falcon: Smugglers Run, guests climb into the cockpit of “the fastest hunk of junk in the galaxy” for their own Star Warsadventures. They take the controls of the Falcon in one of three unique and critical roles as the ship hurtles through space. Some will be pilots, some gunners and some engineers, creating multiple ways for guests to engage with the attraction in an experience that responds in real time to the actions they take.

Exciting Star Wars themed foods are among the many discoveries just waiting to be made while wandering the lively marketplace of Black Spire Outpost, where guests encounter a robust collection of merchant shops and stalls filled with authentic Star Wars creations.

Star Wars: Galaxy’s Edge is the first land within a Disney park designed to integrate with the Play Disney Parks mobile app. The app debuted last year and offers interactive adventures and experiences that bring surrounding environments to life at Disneyland Resort. When guests choose to use the Play Disney Parks app in Star Wars: Galaxy’s Edge, they will be able to transform it into their very own Star Wars: Datapad. Using the app provides new opportunities for guests to engage with the land, such as translating a galactic language or learning what’s hidden inside crates and containers.

In addition, guests can use the Play Disney Parks app to interact with elements in Star Wars: Galaxy’s Edge, including droids, blinking door panels and antenna arrays. Throughout the day, guests may participate in a multiplayer game throughout the land, “Outpost Control,” to support either the Resistance or the First Order.