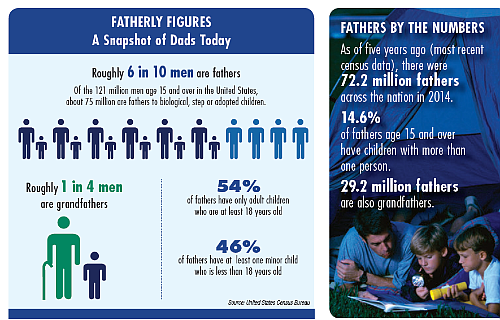 According to the Library of Congress, “In June of every year, we honor fathers. The first Mother’s Day was celebrated in 1914, but a holiday honoring fathers did not become official until 1966, when President Lyndon Johnson declared that the third Sunday in June would be Father›s Day. President Richard Nixon made this proclamation permanent in 1972. But this doesn’t mean that the holiday was not celebrated before this time.

The idea for Father’s Day is attributed to Sonora Dodd, who was raised by her father after her mother’s death during childbirth. While listening to a sermon at church on Mother’s Day, she thought about all her father had done for her and her siblings and decided fathers should have a day, too.

Because Dodd’s father was born in June, she encouraged churches in her area, Spokane, Wash., to honor fathers that month. The first Father’s Day was celebrated in Spokane in 1910.

In 1924, President Calvin Coolidge made it a national event to “establish more intimate relations between fathers and their children and to impress upon fathers the full measure of their obligations.”