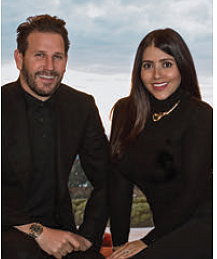 Dynamic husband-and-wife real estate team Branden and Rayni Williams are the co-founders of Williams & Williams Estates Group in Beverly Hills. In the past year alone, the duo has sold over half billion worth of luxury real estate including the $110 million Carbon Beach house in Malibu, which was the second highest-priced home in Los Angeles in 2019. The team also sold the Stanley House for $33 million, which broke the record for the highest sale in the Hollywood Hills/Sunset Strip. They will be representing the world’s most expensive listing, a $500 million spec home in Bel-Air, when it comes on the market.

With record-setting sales in Beverly Hills, the Bird Streets, and beyond, the power couple has made a name for themselves as one of the top-producing teams in the nation. They specialize in architecturally significant and one-of-a-kind properties in Los Angeles.