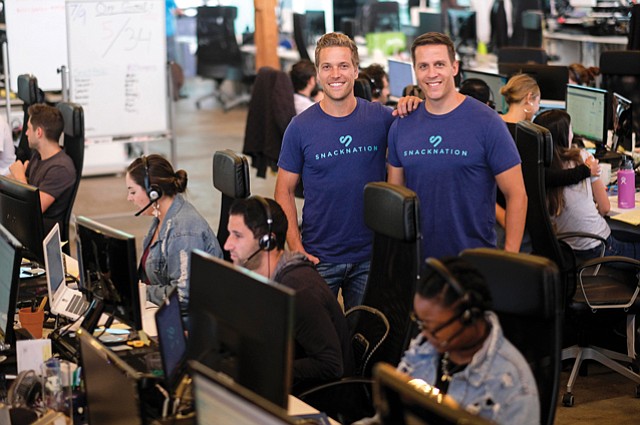 Around 50 new snack brands are incorporated into Culver City-based SnackNation’s supply chain every month, creating a situation that could easily be chaotic if it weren’t for the company’s data and analytics software.

Co-founder Sean Kelly even bills SnackNation as a “data and analytics insights company disguised as an online snack marketplace.”

The company made its debut this year and is ranked No. 3 on the Business Journal’s list of fastest-growing companies, reporting $16.9 million in 2017 revenue, up 831 percent from the $1.8 million in sales the company reported in 2015. The company was co-founded by Kelly and Andy Mackensen in 2014 and raised this summer a $12 million Series B round led by 3L Capital Holding.

SnackNation, despite its name, does not make any of its own snacks, instead aggregating customized snack boxes it delivers to its customers, which include both individual and corporate accounts. The company uses an e-commerce marketplace to take orders. Consumers can select varying-sized boxes filled with assorted healthy snacks, including offerings from Vegan Rob’s, Clif Bar & Co. and Provisionaire & Co., which does business as Field Trip Jerky.

It counts 500 L.A.-based companies as clients out of the 5,000 offices it serves, including Culver City-based Sony Pictures Entertainment Inc. Other office clients include Microsoft Corp. and The Rocket Science Group, which operates email marketing service MailChimp. SnackNation also has thousands of home clients, according to Kelly. Boxes range from $99 to $350 per month for corporate clients, and the individuals pay anywhere from $5 to $20 monthly.

The company’s end user customers aren’t its only clients, however. With the recent acquisition of San Mateo-based EdgiLife Media Inc. and its Love With Food brand, SnackNation has doubled down on its data analytics offerings to its other customer base – emerging brands.

“We have a proprietary recommendation engine behind our snack curation,” Kelly said. “We measure everything from customers who prefer sweet, savory, combo, crunchy, soft snacks, to rotation preferences and payments preferences. We have all these data and insights into our clientele and market.”

The data that informs the “curation” as the company calls it, not only helps it create different types of boxes for customers but also provides brands with useful data on their products.

Food brands’ entry point to SnackNation comes via its tasting panel where a group of 12 company employees sample anywhere between 100 to 200 new snacks per month and select approximately 50 new ones that are put into rotation. On the logistics end, things can get complicated.

Marco Serrano, the company’s vice president of operations said via email that it can be challenging to keep up with growth, and complexities also increase from having several warehouses on both the West and East Coasts.

The company owns a warehouse in Carson and has contracted facilities in Pennsylvania and North Carolina. It counts EchoData Services Inc. in New Holland, Pa., and Fresno-based Inland Star Distribution Centers Inc. as third-party logistics partners.

Serrano said the company primarily used NetSuite for logging in receipt of goods, inspection, and other warehouse and fulfillment activities. Storage and organization data for its warehouses is filtered via the company’s information on customer snacking and payment habits. Kelly said SnackNation can predict snack box curations three to four months out.

“The snacks need to completely leave our warehouse in four to six weeks,” Kelly said. “We make sure supply is depleted.”

The healthy-snack market is a growing one within the larger snack sector. A recent report by Grand View Research Inc., a market research firm, pegged the value of the niche market at $21.1 billion. It is expected to grow to $32.8 billion by 2035, driven in part by the “changing lifestyle coupled with rising awareness about healthy & nutritious food consumption in between meals,” the report said.

Rob Trice, founder and partner at San Francisco-based Better Food Ventures, said he’s seen consumer demand for healthier snacks. Better Food Ventures is an investment fund that focuses on companies at the intersection of technology and agriculture. Trice’s company invested a small, undisclosed amount in the seed round of EdgiLife, the company SnackNation acquired this summer for an undisclosed sum.

“Subscription-based healthy-snack services are a way to create awareness for the brand and provide more healthy snack options to people at the same time,” he said.

Trice added the healthy moniker was an alternative way for brands to market themselves, but the challenge is the ability to scale if a product proves popular.

“We see a lot of social media influencers, particularly on YouTube, that unveil these healthier snacks and give it a review too,” he said. “If your quinoa snack becomes famous, brands better be able to meet the demand.”

Trice contends the subscription-based healthy-snack companies are here to stay. But an early player in the industry, and a competitor to SnackNation, Red Wood City-based NatureBox Inc. laid off a third of its staff in December, which the company attributed at the time to difficulty in raising new funds.

NatureBox initially curated snacks and then started making its own line of products, which it now sells online and at retail establishments across the country. The company moved from its singular subscription-based model and added retailers to diversify revenue streams, according to media reports.