Financial technology stocks have taken a wallop in recent weeks — driven primarily by runaway inflation and rising interest rates — that’s made the general market downturn seem comparatively mild. Analysts, however, say the slump is prompting some self-reflection that could ultimately inject much-needed stability into the fintech industry.

The flood of SPAC-backed fintech debuts have all but evaporated, and leaders like the digital stock broker Robinhood Markets Inc., Block Inc. and Paypal Holdings Inc. are down more than 60% from October 2021. Over the same period, the S&P 500 dropped 8%.

Local fintechs haven’t fared much better than their NorCal counterparts: After a promising public offering in January that saw its stock price rise to a high of $14.30, shares for the West Hollywood-based fintech and banking app company Dave Inc. closed at $4.42 on April 25. 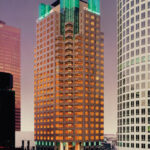 Jason Wilk, the chief executive officer of Dave, acknowledged the general market turmoil in a statement to the Business Journal, and in spite of it says he’s “never been more excited about the future of Dave.”
“While the public markets are challenging at the moment, we are thrilled we achieved this milestone and that we have the necessary capital to continue on our mission to level the financial playing field of our members,” said Wilk. “There’s still 150 million people in the U.S. alone who could use our help; we’re just getting started.”

Likely concerned with facing a similar predicament, some still-private fintech firms in Los Angeles with prospective SPAC plans have gone mum on the timeline of their debuts. The Marina del Rey-based sustainability fintech Aspiration Partners Inc. in August announced its plans to debut via a business combination with the blank-check company InterPrivate III Financial Partners Inc.

The company has won support from major investors including former Microsoft chief executive Steve Ballmer, raked in hundreds of millions in financing, and recently released a stellar fourth-quarter 2021 report, but its leaders have been guarded on the subject of its public offering plans. Andrei Cherny, Aspiration’s chief executive officer, recently told Bloomberg that the firm was “excited about the prospect of being a public company, hopefully in the not-too-distant future,” but a company spokesperson noted in an email to the Business Journal on April 25 that no firm timetable for the debut has been set.

Joshua Lastine, a transactional attorney at Lastine Entertainment who regularly advises clients on fintech matters, said the defensive posture these fintechs are taking is completely reasonable given the current calamity of the economy.

“The chaos of the last few months – from the pandemic, to the war, to regulations and threats of regulations, interest rates and inflation, I could go on, but all of that’s reasonably given these companies pause,” said Lastine.

While the short-term outlook seems bleak for fintechs compared to the booms of 2020 and 2021, Lastine said the lull is giving the industry some much-needed time to reflect and reassess.
“It was easy to get caught up in the craze, but the market at the time was really the wild, wild West. It was an unnatural evolution of the industry,” Lastine said. “Whatever emerges from here seems as though it will have more of a traditional backing.”

Noor Menai, president and chief executive officer of the downtown-based CTBC Bank Corp. USA, shared a similarly optimistic outlook for the long term. While upstart fintech companies gained an upper hand in the early days of the pandemic as an unconventional alternative skirting the regulatory requirements faced by institutional banks, Menai said those traditional competitors spent that time developing their fintech and shoring up their infrastructure.

“Until recently, you would have needed billions to compete with a Robinhood or any other neobank. That was a theme that was set, even pre-Covid , so what hope would there be for a community bank?” said Menai, who also serves as deputy head of international business for CTBC’s Asia-based parent company. “Then the pandemic hit, and suddenly on one Friday in March of 2020 (remote) payment systems became the lifeblood of every financial institution. Suddenly, we all became fintech.”

The post-Covid realignment helped big banks regain some of that lost footing, Menai said, but it’s local outlets that are finding the greatest tailwinds.

“The community banks, which everyone wrote off as part of the horse-and-buggy crowd, have become the application gateway for these big banks,” said Menai. “The impossible nature of interaction with the government made it easier. Your typical restaurant owner couldn’t deal with the city, they couldn’t even deal with the prominent traditional banks; but they could get in touch with their community bank.”

Currency exchanges for many U.S. companies and consumers are almost wholly digital, Menai noted, making the distinction between a pure fintech like Robinhood and community banks with fintech capabilities less important. Given the growing complexity of blockchain, NFTs, and everything else under the fintech umbrella, Menai said he suspects consumers will increasingly turn to local alternatives that can lay out options in practical terms.

Menai said the story of fintech, like many new industries, is a case of the technology rapidly outpacing the laws governing it. Making matters worse, Menai said, the industry was dominated until recently by disruptors and visionaries who were eager to eschew the traditional financial infrastructure.

“You can’t stress enough how far ahead these guys are,” Menai said. “They’re not bad actors, they’ve just been monomaniacally obsessed with breaking the shackles of the modern financial system. … But you have to actually go out there and design the infrastructure.”

Between fintech disruptors and consumers is a gap that community banks can work to bridge, Menai added. The deeper their roots are set in a community, the more a bank can benefit from their fintech edge.

In that regard, he said, Los Angeles is in a great position. “Los Angeles is fast becoming the destination of these technology firms, not just necessarily fintech firms,” said Menai. “And they’re benefitting from all the infrastructure that comes with it.”