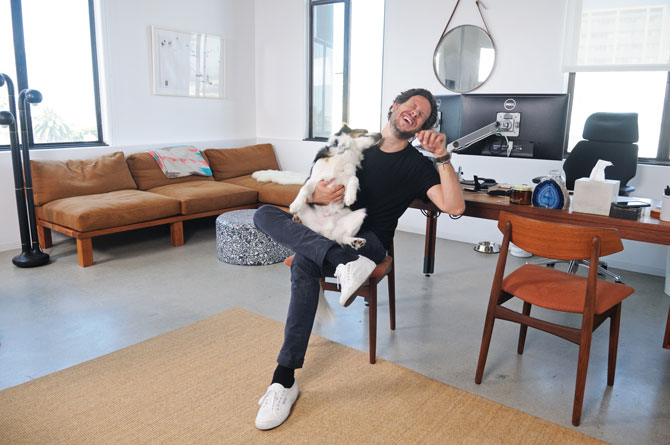 Ophir Tanz is co-founder and chief executive of GumGum Inc., self-described as an artificial intelligence company with expertise in computer vision. Even with that explanation, Tanz said, it’s often hard for the business community to wrap its collective head around what GumGum actually does.

That’s not just because of the company name, which always gives potential clients something to chew on. Tanz said the company chose GumGum because it’s short, memorable, phonetic and non-limiting in terms of what services the company might offer.

“We didn’t want to put GumGum in a box – we would be doing a variety of things,” Tanz said of the Santa Monica-based company, founded in 2006. GumGum now has about 300 employees around the world, including contingents in the U.S., U.K., Australia, Japan and Canada

“I think what people routinely miss about GumGum is that we are (an) engineering first, tech-oriented company,” Tanz said. “Effectively, what we’re trying to do is teach computers to see, to create value – so we specialize in our computer vision, a form of AI. Our core mission is to take this very powerful technology – it’s only recently become this powerful – and use it to create value throughout the world in a variety of ways. We’re doing everything from marketing to health care.”

Giving “eyes” to computers is exhilarating but demanding work. Tanz said GumGum’s two-year-old space was designed to make long hours at the pet-friendly office as welcoming as possible. Prioritizing personal comfort fits the philosophy of GumGum, which offers a casual dress code and an open vacation policy.

“At the end of the day, you are either doing great work or you’re not,” Tanz said. Tanz, who grew up in Tarzana and Beverly Hills, wore a uniform during his days as a student at the Buckley School in Sherman Oaks, and enjoys the same daily convenience now by creating a workday uniform consisting of an Alexander Wang black T-shirt, black jeans (Rag & Bone or Acne Studios), and Superga athletic shoes.

“I spend a lot of time here, the team spends a lot of time here, and I want the environment to be one that is pleasant to be in, inspiring if possible,” Tanz said. “The idea was to create a museum, a studio kind of aesthetic, but also (be) inviting and comfortable.”

Tanz called on artist and childhood friend Carly Jo Morgan to oversee the overall look of the office space, which also features some of her artwork on the walls. Morgan softened the architect’s industrial design with Morgan’s distinctively sculpted gray and white terrazzo furniture along with plenty of natural wood and pillows.

“Going the cheap route, making all of the desks out of doors, I respect that approach,” Tanz said. “But I think there’s a lot of ROI that we generate by being comfortable.” – Diane Haithman