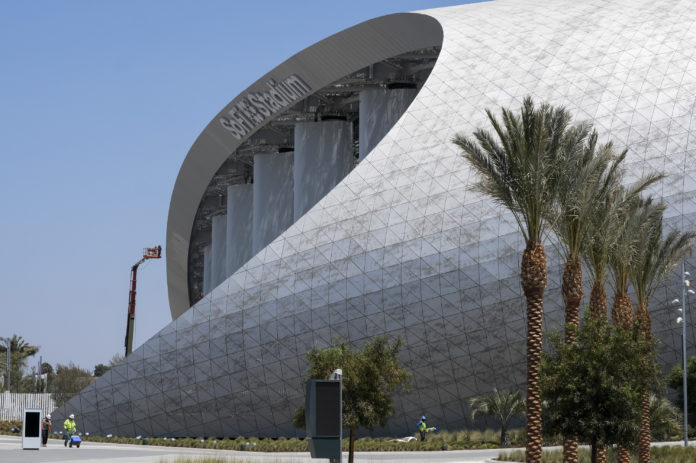 The highly anticipated opening last year of SoFi Stadium, home to the Los Angeles Rams and Los Angeles Chargers, was just the beginning of a major growth spurt underway in Inglewood. The NFL venue is one piece of Hollywood Park, a massive development led by Rams owner Stan Kroenke, that will have housing, retail, office, parks, a theater and hotel. The Los Angeles Clippers are also planning a move to the city, developing an 18,000-seat arena in time for the 2024-25 season. Other developers have taken note.

One of the biggest projects in L.A. right now — and the key catalyst for development in Inglewood — is Hollywood Park. The mega mixed-use development is centered around SoFi Stadium. Completed last year, the stadium is home to the Los Angeles Rams and the Los Angeles Chargers.

But the development as a whole is much more than just the National Football League stadium.

It covers roughly 300 acres and will include retail, office space as well as multifamily units, a hotel, public parks and a performance venue. NFL’s West Coast headquarters will be at the park and is set to open in the next few weeks.

The project is the brainchild of Rams owner Stan Kroenke, with Wilson Meany acting as the development manager.

Jason Gannon, managing director of SoFi Stadium and Hollywood Park, spoke with the Business Journal about the development and Inglewood.

The development has a lot of different components. How do
you balance all of them to make one comprehensive development with multiple uses?
Having 300 acres and the size of the project really allows us to create a really dynamic and well-thought-out balance between the various uses of the site. The stadium and the performance venue are incredible in and of themselves, and also having 300 acres to space out the retail and the residential. … We are working to create a unique experience within each component, but also those that want to experience more than one component can walk around and spend time here at Hollywood Park.

Why create this space in Inglewood specifically?
It gets into the size. If you look at it from a real estate development perspective, 300 acres on the Westside of Los Angeles, this is a piece of land that shouldn’t exist. … This location has really strong infrastructure, really good infrastructure, and is in proximity to the various freeways and the airport.

What do you see Hollywood Park and the new NFL stadium meaning to L.A. in the long run?
This will be really a new downtown Los Angeles. It’s centrally located within the L.A. basin and is a place where people throughout the entire region can get to and experience and spend time here, whether it’s a football game or a concert, but also spend time in the park space or enjoying incredible local Inglewood retailers and restaurateurs.