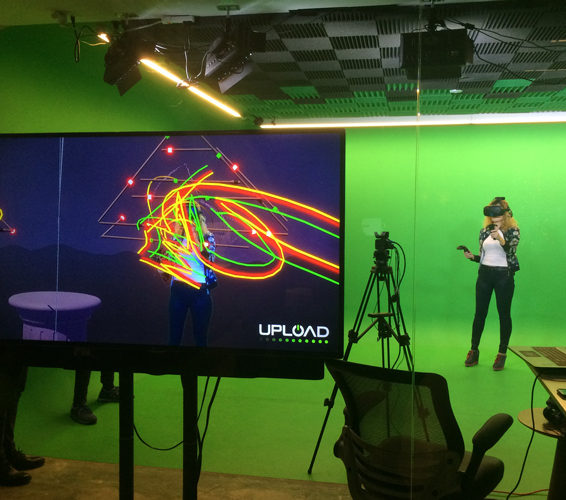 Now startup Upload thinks the next evolution in thespianism is immersive acting – acting for virtual reality or augmented reality entertainment.

The virtual reality media company is developing a one-week course it expects to launch in April to teach performers the art of acting in three-dimensional media. The course is limited to around 30 participants and will be hosted at the studios of the Marina del Rey-based company, which has green screens and specialized camera equipment for capturing virtual and augmented reality.

“What we see is that there are a lot of interested parties in the sort of Hollywood studio system (who want to know) how their skills can translate into virtual reality,” said Jacki Morie, vice president of education with Upload.

Much of the course will focus on teaching actors about how to engage with the new medium, she said. For example, traditional actors might be challenged by the notion of direction while acting for virtual reality.

“When you are acting for film or TV you are usually doing all your acting towards a camera,” said Morrie. “In an immersive environment, there is no camera (to frame the scene). You’ve got to have techniques that really move the action along and really direct the gaze of (the audience).”

Leaf Group filed a prospectus last week with the Securities and Exchange Commission declaring its intent to offer $22 million of common stock as part of a bid to boost its turnaround efforts.

Funds would be used for working capital and potential acquisitions.

Santa Monica-based Leaf Group runs a diversified portfolio of e-commerce and online publishers, including home décor e-tailer Society6 and how-to website eHow. However, an overreliance on Google Inc.’s search engine caused the company’s website traffic to fall dramatically over the past six years. The company believes cost cutting and acquisitions of fast-growing e-commerce businesses has it on the verge of a turnaround, Sean Moriarty, Leaf Group’s chief executive told the Business Journal in December.

Management estimated in its prospectus that full-year revenue for 2017 would be between $128.5 million and $129.5 million, compared to 2016 revenue of $113.5 million. The firm did not estimate income for last year. It had approximately $31.3 million in cash and cash equivalents on Dec. 31, 2017, according to the financial filing.

Water damage from broken or leaking plumbing is the bane of home owners – and insurers – but it’s often difficult to catch, especially since pipes can burst when no one is home and leaks can form in places no one can see, such as behind drywall.

That’s exactly the problem that Flo Technologies Inc. of Culver City has in mind for its new Home Water System.

The company has developed a device that measures the flow, pressure and temperature of water coming into single-family homes. The device is added to a home’s incoming piping and is Wi-Fi connected to a mobile app, which uses an algorithm to analyze a home’s daily water usage and alert owners to odd activity, which could be warning signs leaks or impending plumbing failure.

The system is sensitive enough to detect a single drop of water falling each minute, said Gabriel Halimi, chief executive of the company, who co-founded the startup with his father Henry Halimi.

The system looks for leaks by shutting off the water to a home using a ball valve and then watching pressure levels within the plumbing, he said.

The firm has raised more than $11 million since its founding in 2015 from investors including USAA, Crosslink Capital and Anthemis Group.

Staff Reporter Garrett Reim can be reached at greim@labusinessjournal.com or (323) 556-8332