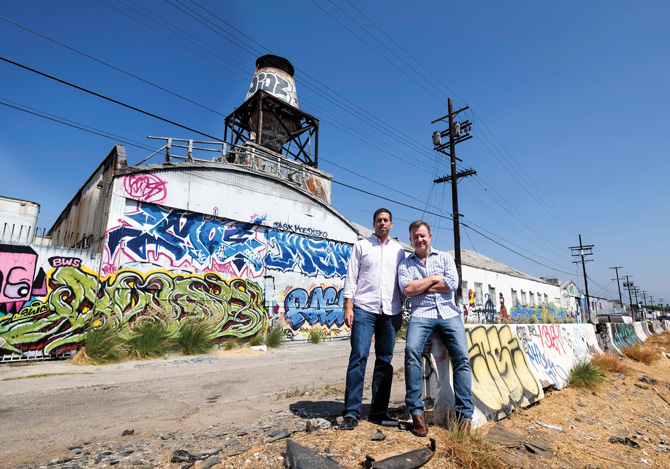 The pair purchased the graffiti-slathered property in 2016 for $2.3 million and are spending some $3.7 million to renovate the site as part of the planned Hatch BioScience Labs project, a ready-to-use lab facility – known as a wet lab – for early-stage biotechnology firms. The 22,000-square-foot building is nestled between Cal State Los Angeles and USC’s Health Sciences Campus in the El Sereno district, where Glass and Kozloff believe the lab will be an important cog in a burgeoning bioscience corridor.

“We’d love to be the axle in the L.A. bioscience hub,” said Glass, chief executive of ASG Real Estate Inc. in Brentwood.

The Hatch lab, set to open late spring 2018, is part of a greater regional effort to alleviate a shortage of biotech incubator space in Los Angeles, which insiders said has hampered market growth.

A lack of affordable research space at facilities to develop new drugs and other biotech products has sent legions of L.A.-area university science graduates planning to start new companies to markets such as Boston, San Diego and the Bay Area, according to industry veterans.

“The L.A. region has a lot of talent at its universities,” said Carolyn Hull, vice president of industry development at the Los Angeles County Economic Development Corp. “The problem is physical space. They can’t find enough laboratory space to meet their needs, at price points that work for them.”

That’s the market gap Glass and Kozloff want to exploit.

Most wet labs in the greater L.A. region rent bench space – a term for a certain, limited work area within a shared research facility –for between $20 and $30 a square foot. The two developers said they plan to charge companies looking for a full suite around $4 a square foot – a price competitive with similar space in other biotech hubs in San Diego and the Bay Area.

The L.A. area was poised to become a biotech powerhouse nearly four decades ago, with Thousand Oaks-based Amgen Inc. churning out biopharmaceuticals breakthroughs. But Amgen’s relatively remote suburban location and a traditional, self-reliant corporate model led to few spin-off companies, according to the book “The Rise and Fall of Urban Economies: Lessons From San Francisco and Los Angeles,” co-authored by Michael Storper, distinguished professor of regional and international development in the Urban Planning Department at UCLA.

Talent – and fledgling companies that come with it – gravitated toward faster growing biotech networks in the Bay Area, and later to San Diego, where UC San Diego grew into a spur to the biotech industry there.

Governments, industry advocates, universities and biotech firms across Los Angeles County are now scrambling to catch up as the industry becomes a huge economic driver.

L.A.’s share of that market is middling, despite the size and educational resources the region offers. Biotech firms here drew just $153 million in global biotech venture capital last year, lagging far behind San Diego, which received $650 million, he said. L.A. is even further behind the Bay Area, which bagged $3 billion in biotech venture capital money despite generating half the 5,000 science graduates as L.A.-area schools.

Some industry insiders said the region’s second-tier status is slowly changing, but there are hang-ups – such as wet lab and incubator space.

“We’re not recognized as an industry hub – yet,” said Dina Lozofsky, executive director of the L.A. office of San Diego-based Biocom, a bioscience industry advocacy group. “But we have almost 600 life sciences companies in L.A. County. … We are growing tremendously. But one of the struggles within the Los Angeles region is sizing up the demand for incubator lab space.”

There are other efforts to address the wet lab space issue.

Cal State L.A. is in the process of building a $12 million L.A. Biospace Incubator

lab and wants to host as many as two dozen early-stage startup companies as part of an incubator on campus. The program will be paid for by county, federal and private funds and will be a boon for students and biotech entrepreneurs, officials said. The 20,000-square-foot facility, which has not established rental rates yet, is set to open in fall 2018.

“It’s part of a larger L.A. County initiative … to build our biotech capacity, to build a bioscience ecosystem,” said Jose A. Gomez, an executive vice president at Cal State L.A. and chairman of its new campus incubator. “The demand is great. There’s a lack of available wet lab space.”

Others, however, said recent growth in biotech incubators across the region may have oversaturated the market.

The Pasadena Bio Collaborative Incubator and LabLaunch in Monrovia have undergone recent expansions, while the Los Angeles Biomedical Research Institute at Harbor-UCLA Medical Center and the California NanoSystems Institute at UCLA have just thrown open their doors to nonacademic biotech start-ups.

There are now at least nine biotech incubator labs across Greater Los Angeles with a combined 75,000 square feet of wet lab space to house an estimated 50 early stage companies, according to the Southern California Biomedical Council.

“There is no shortage of lab space, at the very early stages,” said Ahmed Enany, president and CEO of SoCalBio, another Los Angeles-based advocacy group. “But if the company grows, and they want 50,000 square feet, or 100,000 square feet, there’s no space.”

That was the problem John Chi, who launched his biotech company Synova Life Sciences Inc. three years ago

Chi hit a wall hunting for an appropriate lab to house the fledgling regenerative medicine company, which is developing a mobile device to harvest stem cells from human fat for orthopedics and employs two doctors and two business development and sales specialists. He was hoping to spend less than $1,000 a month for a lab with cell tissue incubators, microscopes and a refrigerator for storing media for cells and fat.

But he found that labs from Orange County up to Ventura County wanted up to $2,000 a month, while some wouldn’t open their doors to a company with human tissue.

“It was frustrating,” Chi said. “We couldn’t get our experiments going. We looked for eight to nine months. Basically, nothing.”

He eventually found a bench within in a small medical lab in Pasadena. Now he’s first in line to lease a wet lab suite at the future Cal State L.A. incubator, but past experience left him jaded.

“In the Bay Area, there are biotech incubators. Also in San Diego,” Chi said. “There’s shared knowledge. Energy. We need a similar environment to help biotech bloom in Los Angeles. There would be a lot more start-ups in L.A. with more lab space.”