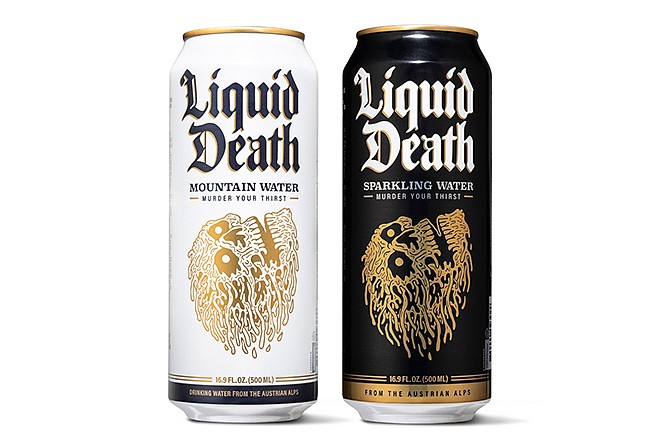 Santa Monica-based canned-water company Supplying Demand Inc., which does business as Liquid Death, has raised $23 million in Series B funding.

The round was led by an unnamed “consumer-focused family office” with participation from Pernod Ricard Group’s venture arm, punk rocker Fat Mike, sports commentator Pat McAfee and existing investor Velvet Sea Ventures, according to the company.
The new capital brings Liquid Death’s total funding to just over $34 million. The company sells water with heavy-metal branding under the tagline “Murder Your Thirst.”

It has gone viral in recent years for its transgressive marketing, such as a “Greatest Hates” vinyl album that sets online criticism for the company to heavy metal music, and a “Killer Baby Namer” campaign, which promises a free 18-year supply of Liquid Death to those who legally give their children names like “Megalodon Bonecrusher.”
“Over the past six months, we’ve seen high growth like never before,” Liquid Death co-founder and Chief Executive Mike Cessario said in a statement to the Business Journal.

Eye-catching branding is Liquid Death’s main selling point. Although the company added one new product this year — sparkling water — it does not claim to be anything more than spring water in a can.

Despite the simplicity of the offering, the approach seems to be working.
Whole Foods Market Inc. began carrying the water in its stores nationwide in February. Since then, it has become the fastest growing water brand in the grocery chain, according to Liquid Death. The company also sells its products through tattoo parlors, bars, cafes, local liquor stores and in more than 1,000 7-Eleven stores in Southern California.

Prior to the Whole Foods deal, Liquid Death’s largest sales channel was its online store. That may have inadvertently positioned the brand well for the Covid-19 pandemic, which has boosted ecommerce sales in nearly every category.