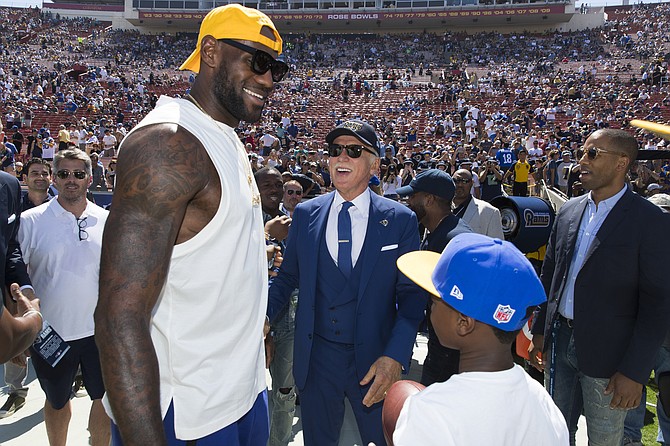 Primary employment: Commercial real estate development. Kroenke is one of the largest landowners in the United States, with roughly 1.38 million acres.

Rams ownership: Kroenke became a 30% minority owner when the franchise moved from Los Angeles to St. Louis in 1995. He increased his stake to 40% soon after. In 2010, he purchased the remaining 60% from Dale “Chip” Rosenbloom and his sister Lucia Rodriguez, the son and daughter of late Rams owners Georgia Frontiere Rosenbloom and Carroll Rosenbloom. Kroenke paid $450 million for the final portion on a $750 million franchise valuation. On Jan. 12, 2016, the National Football League approved the Rams’ application to relocate from St. Louis to Los Angeles.

Inglewood property purchase: Kroenke acquired a 60-acre tract of land in Inglewood next to the Forum in January 2014. Madison Square Garden Co., which owns the Forum, had tried to buy the adjacent property for an estimated $90 million. Kroenke Group announced in January 2015 that it was teaming with Stockbridge Capital to build a 70,000-seat NFL and entertainment complex on an expanded 298-acre site.

SoFi Stadium: The stadium, with an estimated cost of $5 billion, is scheduled to open in July. It will be the home field for Kroenke’s Rams as well as the Los Angeles Chargers. SoFi will also host a new college football bowl game, the Los Angeles Bowl, starting in December. In 2022, it will welcome the Super Bowl, and in 2023 it will be the site of the College Football Playoff National Championship game.

Wife: Ann Walton Kroenke (married in 1974) is the daughter of Walmart co-founder James “Bud” Walton. She has an estimated net worth of $7.6 billion, according to Forbes.

Children: Daughter Whitney (born 1977) is an actress and producer. Son Josh (born 1980) is president and governor of the Nuggets, Avalanche and alternate governor of the Rapids.

Estimated net worth: $10 billion (according to Forbes).