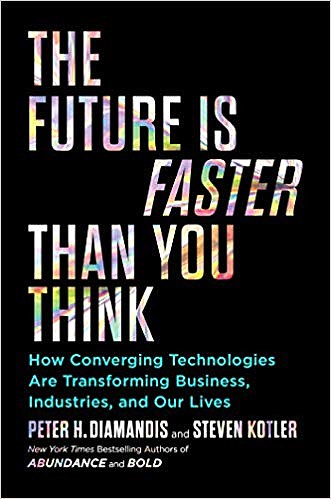 "The Future Is Faster Than You Think," by Peter Diamandis and Steven Kotler, is one of the books Stan Kroenke recommends.

An avid reader, Stan Kroenke says he finds himself pulling ideas from business books and suggesting many of the books to his staff, particularly to Kevin Demoff, who is in his 11th year as chief operating officer for the Los Angeles Rams. “I hope Kevin can appreciate some of my comments that might come out of left field from some of these books,” the Rams owner said. The Business Journal asked Kroenke to recommend some of his favorite books and authors.

“The Future Is Faster Than You Think: How Converging Technologies are Transforming Business, Industries and Our Lives,” by Peter Diamandis, who’s based in Santa Monica, and Steven Kotler: “I’ve read some of Peter’s books before, and they’ve always been thoughtful and well researched because of his interest in technology and his watchful eye and sense of how it progresses. This is about how the rate of change becomes faster in all areas of our life, which is what Kurzweil predicted maybe 25 years ago. It’s generally due to the acceptance of technology and technology working its way into whatever those industries are.”

“How to Win Friends and Influence People,” by Dale Carnegie, and “Think and Grow Rich” by Napoleon Hill: “Carnegie’s book has impacted millions. Hill is someone I started reading in college. He was an interesting guy, hired by Carnegie to study why some economically seem to do better than others. I liked him.”

“The Fountainhead” and “Atlas Shrugged” by Ayn Rand: “Some maybe think she’s controversial, but Rand’s books were definitely influential to a certain type of thinking. Economics has always been in my blood, so I tend to gravitate toward those kinds of books.”

Anything by Malcolm Gladwell: “It’s all about logging those 10,000 hours. One of his books used a hockey analogy that Kevin and I have talked about (the success rate of NHL players born earlier in the year having a leg-up over those born later when they get onto age-related teams).”

Anything by Mark Twain, a fellow Missouri native: “He was certainly the wittiest of them all and the easiest to quote.”