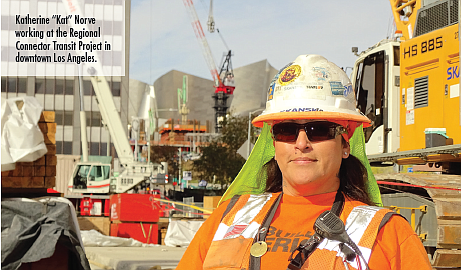 Working in the construction trades is not a career path many people consider, especially women. In fact, only about 3% of people working in the trades are women. That number jumps to about 10% if you include managerial positions, engineers, administrative staff, etc. In such a male dominated industry, women have to do something to stand out. Katherine “Kat” Norve has figured out that something.

While working as the executive assistant to the chief executive officer of a public relations firm, Kat knew she needed more. Kat knew that working as a union tradeswoman would provide that opportunity. “I had a nice office window at the PR firm, but always felt like I wanted to be outside. I made good money back then, but not the money I’m making now plus the benefits like a pension for retirement.”

Through a non-profit training program, Women in Non-Traditional Employment Roles (WINTER), Kat found her way into Laborers Union (LIUNA) Local 300 as an apprentice in 2012. WINTER provides ten weeks of pre-apprenticeship training and exposure to career options in the building trades. “I decided to join the Laborers Union because of all the job opportunities they had available, how supportive they are of women, and because of all the classes they have at the training center in Azusa,” said Kat. “For me this is where I wanted to be, in the Laborers Union.”

Nearly eight years after starting her journey with LIUNA Local 300, Kat is a “top-lander” for Regional Connector Constructors (RCC), building the $1.75 billion underground Regional Connector Transit Project for LA Metro. Kat was the first female employee on the project. “I’m a woman out here and I don’t want to be looked at different,” Kat stated. “I have to be toe-to-toe with these guys even if we’re out here shoveling for eight hours.” As a top-lander Kat’s primary responsibility is to work with the crane operator to rig materials for hoisting into the tunnel, but to also keep the yard running smoothly and ensure supplies and equipment are maintained for the jobsite.

As she got more experience under her belt, Local 300 recognized Kat’s ability to handle herself in a male dominated industry. She is the shop steward for the Regional Connector project, which employed 180 Laborers at its peak. A shop steward acts a facilitator and mediator to troubleshoot any labor-management problems that might arise on the jobsite. “I take that real serious,” Kat said of her steward responsibilities. “Once every few weeks, I’ll walk the jobsite and talk to the guys. I communicate to them, that if they have any problems, reach out, I’m just a phone call away.”

Before Kat could even indenture as a Laborer apprentice she had to pass a rigorous week of evaluation known as ‘boot camp’ in which all candidates are put through a series of physical demands to see if they have what it takes to work in the trade. “I watched a lot of men tap out and just walk away,” said Kat. “I can’t give up. I have four children depending on me.” She resolved to finish the boot camp. “My heart was set on becoming a Laborer.” After the trial week was done and she became a Laborer apprentice, Kat stated, “It was the best feeling I’ve ever had! It’s been an amazing journey for me.”

Now, Kat gives back to the industry. In 2016 she became a board member for WINTER, participating in monthly meetings and fundraisers to ensure the non profit has the funds it needs to continue its programs. Kat also encourages women to follow her path into the trades. “I try to tell them how it is in the field, what they are getting themselves into,” Kat said when speaking of WINTER candidates. In fact, Kat became a role model for her own daughter Genesis who is now an apprentice in the Laborers Union. “My daughter has thick skin, she’s going to make it out here.”

Chad Wright is director at the Laborers-Employers Cooperation and Education Trust Southwest (LECET Southwest). LECET Southwest is a partnership between the Laborers International Union of North America (LIUNA) and its signatory contractors to secure projects and jobs, increase market share, and advance market-related interests throughout the states of California, Arizona, and New Mexico. Learn more by visiting lecetsouthwest.org.