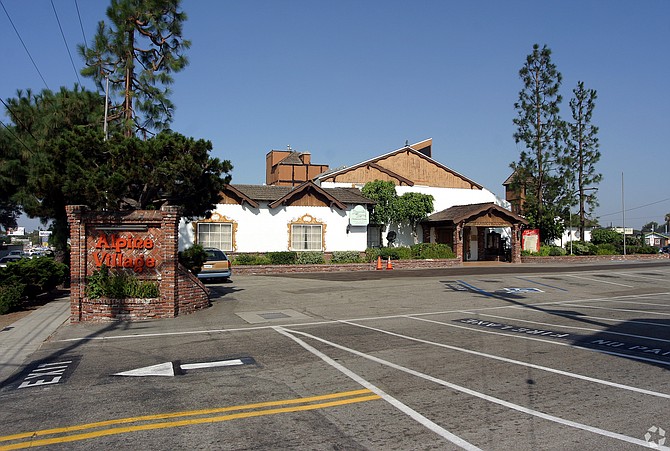 The landmark Alpine Village Restaurant will close in April.

An upcoming landmark designation will ensure the walls at Alpine Village remain intact, but there’s no guarantee the lights will stay on.

The quaint, Bavarian-themed shopping center, located on a 14-acre lot in the unincorporated community of West Carson, plans to close its namesake restaurant in April and lay off 35 employees, according to a notice it filed with the state’s Employment Development Department.

“They tried everything — they spruced it up, reduced the number of days it was open, held events at night with music — but it was just bleeding money,” said Paul Pearlson, an attorney representing the Alpine Village Inc., a consortium of about 30 families who have equity stakes in the shopping center. “They are all sad about it. It was a significant loss for a number of years.”

He said the 18 other businesses at Alpine Village will remain open, along with a daily swap meet in the property’s northern corner.

The restaurant closure follows a Jan. 24 decision by the Historical Landmarks and Records Commission to recommend to the Los Angeles County Board of Supervisors that it designate Alpine Village as a county landmark.

The two matters are unrelated, Pearlson said, adding that designation will preserve the look of the center and will limit what current and future owners can do with the property.

The idea of landmark designation surfaced in August when the county’s Department of Regional Planning informed the commission that Pacific Industrial, a Long Beach-based real-estate acquisition and development company that constructs warehouse and distribution facilities, said it was in escrow to purchase the Alpine Village complex.

According to a memo issued by DRP on Oct. 17, Pacific Industrial “intended to demolish most of the chalet-style establishment … even if the property is historically significant.”

The commission received about 70 letters in support of landmark designation. And 2,188 people signed an online petition backing landmark status. Pearlson said the owners have fielded purchase offers in the past but denied the property was in escrow.

Alpine Village consists of seven one- and two-story buildings, completed from 1969 to 1974. It served as the social and cultural center for German, Hungarian, Croatian and Polish diaspora in Southern California.

German immigrants Josef Bischof and Johann Rotter applied for the early building permits for the complex, according to the DRP memo. Bischof was inspired by the Danish- themed village in Solvang.

Initial tenants included Alpine Village Cosmetics and Salamander Shoes, both still in business at the village.

The restaurant building was completed in 1974. It was used as a 9,645-square-foot clubhouse and dance hall for the German American League. Another 8,170 square feet were added in 1984, and the entire space was converted into the Alpine Village Restaurant. The venue hosted popular Oktoberfest events, among other gatherings, over the years.