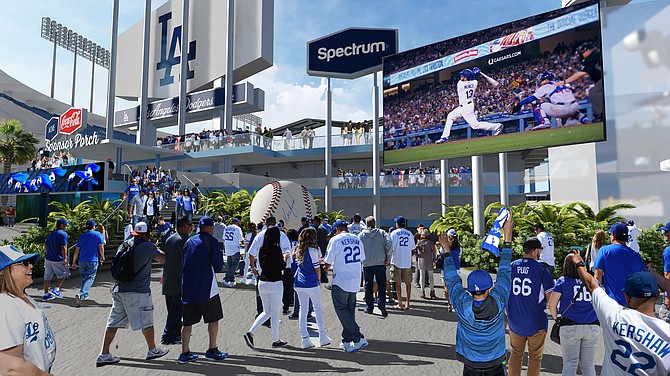 Looking ahead at what’s to come for the Dodgers and other L.A. sports franchises.

Kathryn Schloessman, president of the Los Angeles Sports and Entertainment Commission, can envision the moment when the local sports landscape will finally rebound from the economic impact of the Covid-19 pandemic.

It’s when the Super Bowl arrives at SoFi Stadium.

“To focus on the positive, I’m in the camp that sometime next year, we’ll be back to some kind of normal, and the first major event we have in February 2022 will be showing off how Los Angeles is a safe tourism destination — the first high-profile event in L.A. post-Covid,” Schloessman said.

“Sports can jumpstart the economy with travel, tourism and hospitality. (It’s) one of the largest business sectors in L.A. It creates jobs. That’s everyone’s focus — workforce development and the impact it has on the city. Sports create that global visibility.”

Until then, however, L.A.’s professional sports franchises, along with the businesses and workers who rely on them, are facing the most challenging period in their histories.

The coronavirus has upended the seasonal rhythms and established routines of local teams while inflicting damage on their bottom lines from the loss of ticket revenue and reductions in other revenue streams.

But L.A.’s professional sports franchises may be better equipped to weather the Covid-19 storm than most.

Five L.A.-based teams were recently ranked among the 50 most valuable sports franchises in the world, according to Forbes, which seems to imply that the city’s global economic foundation affords some pandemic protection for the teams that play here.

“I don’t know if you want to call us or anyone ‘pandemic resistant’ because we’re all so impacted by this,” said Tim Harris, chief operating officer and president of business operations for the Los Angeles Lakers. “That really speaks to the optimism that there is a back side to all this.” 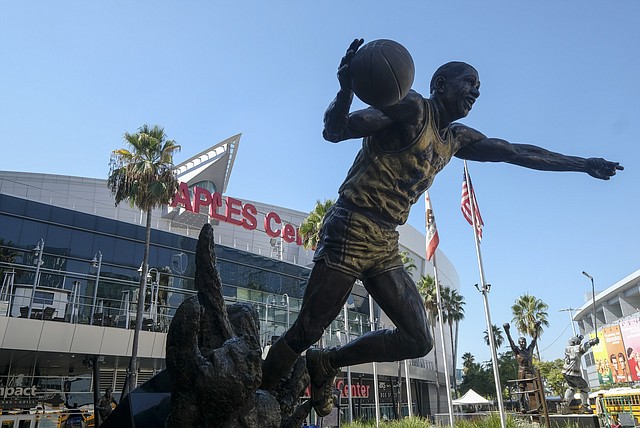 The Lakers made the playoffs, but Staples Center did not.

The Lakers, No. 4 on that Forbes list with a valuation of $4.4 billion, up 19% from 2019, have joined the Los Angeles Clippers (No. 36, $2.6 billion) in trying to finish a delayed NBA playoff run thousands of miles from the ticket-holding fans who would otherwise be packing Staples Center.

The Los Angeles Dodgers (tied for No. 14, $3.4 billion), meanwhile, daily navigate uncertainty about whether the Major League Baseball season will be completed as the team plays home and away games at empty ballparks.

“Those big-picture (valuations) will be relevant once we get back to a steady state again,” said Dodgers President Stan Kasten, who is also a part owner in Guggenheim Baseball Management. “In the meantime, we’re just doing our best under the circumstances, keeping everyone safe and following protocols.”

There is also a cautious ramping up of a National Football League season with the Los Angeles Rams (No. 11, $3.8 billion) and Los Angeles Chargers (tied for No. 38, $2.5 billion) preparing to take the field at the soon-to-be-finished SoFi Stadium in Inglewood.

“The prerequisite to any business moving forward is the priority to having the best possible work environment, to feel safe and protected,” said Kevin Demoff, the Rams’ chief operating officer. “The sports business may be defined with certain verticals that don’t allow us to strategically pivot to something we’re not. Ultimately, we’re a business of playing football, entertainment, live events,” he added. “But that said, we can figure out how to operate safely and have our games on television to give fans a connection they need ... Even if games are on TV with no fans, it feels more normal.”

That includes the Los Angeles Football Club and the Los Angeles Galaxy, who participated in Major League Soccer’s truncated tournament in July and restarted their regular season last week, following the league’s pause back in March.

The Los Angeles Sparks are also playing again in the WNBA’s version of a bubble in Bradenton, Fla. But the Los Angeles Kings were eliminated for contention from the National Hockey League playoffs, which began earlier this month.

The Dodgers draw an estimated $185 million a year in gate receipts with an average ticket price of $43, according to Forbes. But without fans in the stands, the team has been able to give sponsors more exposure with virtual signage, logos on the field and large branded tarps covering sections of seats that otherwise would have been occupied by paying spectators.

“The games work on TV, and thank goodness for that,” said Kasten, noting that the team-owned cable channel SportsNet LA is available for the first time this season to DirecTV customers after a six-year distribution dispute.

“It’s a nice coincidence that everyone in the market can finally see us for the first time,” he said. “The sponsors are always about long-term plays and relationships. They’re good to us, and we work hard to be good to them.”

The pandemic put on hold the Dodgers’ plans to host the MLB All-Star Game in July — it will take place at the stadium in 2022, instead. To prepare for the game, the franchise recently invested more than $100 million in stadium renovations and upgrades to create a new fan environment beyond the outfield pavilions.

The number of life-sized fan cutouts placed in seats around the stadium has topped 10,000 (the team had originally planned to sell 2,000) and raised more than $1 million for the Los Angeles Dodgers Foundation.

That has enabled the team to do more community outreach. It has distributed more than 350,000 meals along with thousands of hygiene kits and has also given more than $300,000 in grants for Covid-19 relief to various community organizations, including the Los Angeles Regional Food Bank.

Dodger Stadium has also become what the team believes to be the nation’s largest Covid-19 testing site. Working with the office of Los Angeles Mayor Eric Garcetti, the stadium began hosting drive-up testing in March.

Access to Lot 13, just off Stadium Way, has ramped up to the larger Lot 1 inside the stadium gates. With a capacity to test up to 7,000 people per day, the Dodger Stadium site has administered more than 270,000 tests to date. Daily testing continues, even as the Dodgers play their home schedule.

“When this all started, we didn’t know what to expect, like everyone else, and wanted to reach out to do whatever we could to help — even if we didn’t know what that meant,” said Naomi Rodriguez, the Dodgers vice president of external affairs and community relations. “This is probably the most important thing we can do in and for our community. A big part of our work has shifted toward these efforts.”

The Lakers’ Harris said the team’s deadline was in early March for 2020-21 season ticket renewals, but “we hit the pause button and, once there is some clarity, the fans are understanding of what is happening. We’ve approached season ticket holders with one size doesn’t fit all.

“Ticket revenue is obviously a big portion of any pro sports team, especially the bigger ones, and with that hole of lost revenue, we have to be mindful in how we spend. We’re still hopeful for a ‘fan-lite’ opportunity that could happen when a vaccine becomes available.”

The Rams recently emailed season-seat holders explaining that they would be able to defer 2020 season tickets to 2021 and that all ticket payment plans would be halted. If fans are allowed into the stadium for the upcoming season, season-ticket holders will have the option to buy tickets for individual games, with certain priorities.

“The fear is sending a note to a season ticket holder on Monday and then having a different world on Wednesday, so you have to give as much information as you can, but know things are fluid,” Demoff said. “If you communicate frequently enough, even if things change, your stakeholders and sponsors and media and everyone else feels like they’re hearing from you regularly enough. It satisfies their need for connection even if the information changes.” 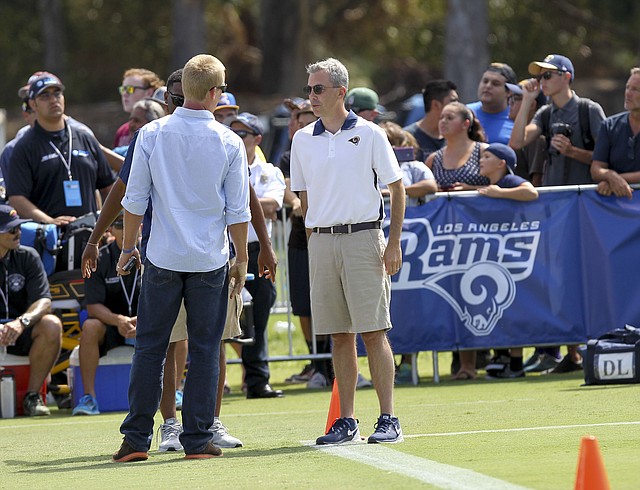 The Rams and Chief Operating Officer Kevin Demoff can only be seen on HBO at the moment.

Fans of the Rams and Chargers also have unique access to see both teams participate in HBO’s latest series of “Hard Knocks,” which debuted Aug. 11. The documentary series provides unfiltered access.

Usually, that includes the drama of roster cutdowns after four exhibition games, but the NFL eliminated those contests. The Rams’ season opener, in a nationally televised Sunday Night Football game against Dallas on Sept 13, could be the first event at SoFi Stadium.

“Normally, we’d be at UC Irvine training camp and having 1,000 fans a day watching, so this becomes an authentic connection for fans who are starving for content,” Demoff said. “Whether that first Sunday night is our grand opening, that’s to be determined. Things change daily right now. The exciting part is that (the stadium is) essentially complete, and it looks fantastic, and it will be a tourist destination for years to come, which is most important no matter what date we say we’re hoping to open.”

The original SoFi Stadium opening was planned for the 2019 NFL season, but record rainfall in 2017 pushed construction plans back a year. The Super Bowl, which had been slotted for 2021, was then moved to 2022.

At the LASEC, Schloessman’s office continues to adjust to changes wrought by the pandemic while pressing ahead on planning for major events. That includes the city’s participation in the 2026 FIFA World Cup and the 2028 Summer Olympics. 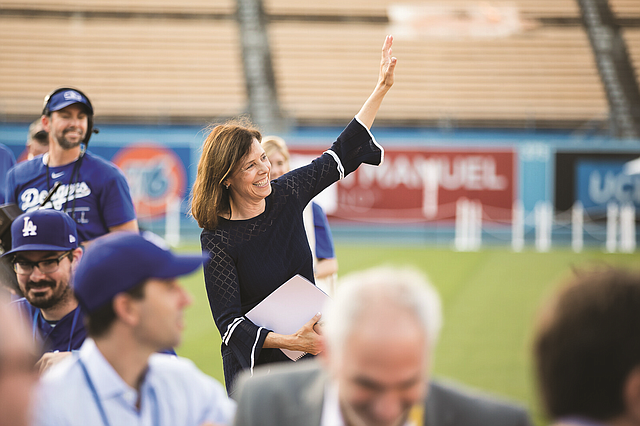 “High-profile sports events aren’t just a moment in time, but there is work happening years before and a legacy that lasts at least five years after it,” said Schloessman, noting the success of the LA84 nonprofit that continues to benefit the city following the 1984 Summer Games.

“Even with canceled events, we are busier than ever. This abrupt change in our lifestyle has helped us relook at the landscape, at what we’re doing and how to pivot to the future and take advantage of things. It’s a moment in time — however it lasts — that we’ll be better, stronger and faster because of it. That’s how we have to look at this.”