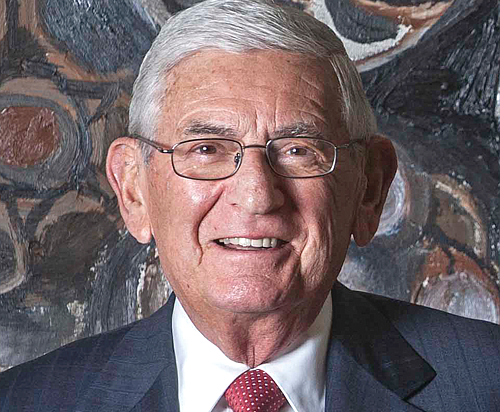 THE MONEY: One of L.A.’s most prominent civic leaders and philanthropists, Broad’s wealth stems primarily from two companies: KB Home, which he co-founded and built into the nation’s sixth-largest homebuilder, and insurer Sun America, which he sold in 1998 to AIG. Broad’s investments include $3.4 billion in art and $450 million in real estate. He has been donating parts of his fortune to causes such as education, gun safety and stem cell research. His efforts in support of charter schools have been met with criticism from some Los Angeles Unified School District teachers as being an assault on public education. This year, the Eli and Edythe Broad Foundations celebrated 50 years of giving and grantmaking, totaling more than $4 billion.

THE BUZZ: Broad has pledged to donate 75% of his fortune during his lifetime. He retired from public life in 2017, turning over his position as chairman of the Broad Foundation to Gerun Riley. His contemporary art museum, The Broad, opened in downtown in 2015 and expects to attract nearly 1 million visitors in 2019. The Broad incurred $14 million in expenditures and paid $8.2 million in federal, state and local taxes in 2018. The Broad Foundation this year committed $30 million to the Eli and Edythe Broad Stem Cell Centers at UCLA, UC San Francisco and USC. Broad has recently taken to major newspapers to express his opinions. In May, the Los Angeles Times published an essay from Broad focused on the development of Grand Avenue downtown. In June, the New York Times published Broad’s opinion piece announcing his support for a wealth tax for the top 1%.