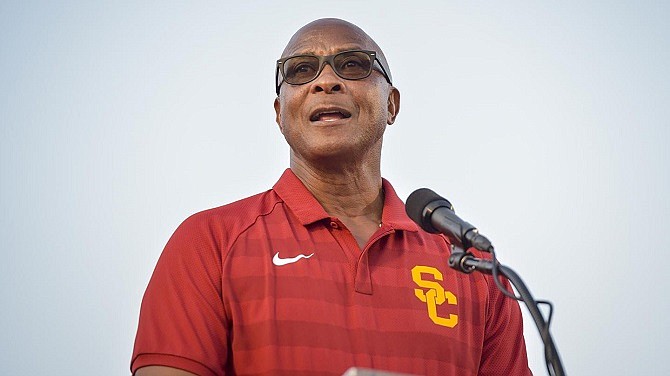 Swann’s resignation was announced in a letter from new USC President Carol Folt to the USC community and the media. The letter said the resignation was effective immediately.

Folt asked special adviser Dave Roberts to serve as interim athletic director until a permanent replacement can be found, the letter said.

This is Folt's first major administrative move since assuming the president post July 1. Her arrival followed a tumultuous year at the school, with multiple scandals prompting the resignation of longtime President C.L. Max Nikias. The school will hold formal inauguration ceremonies for Folt next week.

Under Swann’s leadership, USC won five national championships in different sports and a record 86% of student-athletes earned their degrees. However, during the 2018-19 academic year, the athletic department’s marquee programs — men’s football and men’s basketball — both posted losing records for the first time since 1983-84.

Swann’s tenure was marred by the college admissions bribery scandal that ensnared two underlings. Donna Heinel, the senior woman administrator in the athletic department, and head water polo coach Jovan Vavic were indicted by the FBI’s Operation Varsity Blues investigation. Both were fired by the university within days after the probe became public.

Also indicted were two former women’s soccer coaches, Ali Khosroshahin and Laura Janke. The latter pleaded guilty in May to racketeering charges. At the time, Swann came under criticism for failing to institute sufficient oversight procedures to flag potential violations of school policies.