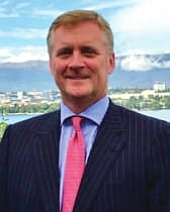 After over 20 years of investment banking for some of Wall Street’s most prominent firms, John Joliet co-founded LA-based merchant banking firm American Discovery Capital (ADC) in 2016 to provide M&A, capital raising and restructuring advice to leading publicly-traded and privately-held growth companies, Boards of Directors, entrepreneurs and family-owned businesses. As a true merchant bank, ADC also has raised a $60 million private equity fund to invest its own capital to alongside its client’s growth initiatives, or in other promising growth opportunities.

Among Joliet’s most notable recent transactions was advising on the sale of Burbank-based ESOP Entertainment Partners, the leading global end-to-end provider of workforce management and automated production software to the entertainment industry, to Texas Pacific Group (TPG), one of the largest private equity firms in the world.