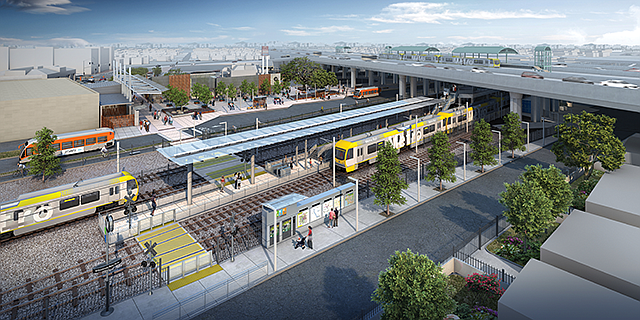 Fast-Tracked: LA Metro has 28 projects slated for completion by 2028.

Los Angeles County is in the midst of one of its greatest infrastructure building booms, as tens of billions of dollars pour into construction for

All of this activity has pushed the leaders of several public agencies and contracting firms into the spotlight — and onto this year’s LA500 list of the most influential business leaders in Los Angeles.

The amount of infrastructure work underway around the county is staggering: $14 billion worth of terminal and access improvements at Los Angeles International Airport, more than $12 billion in rail and subway projects, a $5 billion stadium and entertainment complex in Inglewood, more than $1.5 billion in bridge replacements, a $1.5 billion terminal at the Port of Long Beach — and the list goes on.

“We’ve had infrastructure investment before, but what’s different now is how all this is coming together at the same time and on a scale much larger than any other city in the nation,” said Kelli Bernard, executive vice president and national cities leader for Century City infrastructure giant AECOM. Bernard’s boss, AECOM Chief Executive Michael Burke, makes a repeat appearance on the LA500.

The infrastructure surge is occurring in tandem with a private construction boom in mixed-use, residential and commercial projects around the county.

Donohue, who appears on the LA500 for the first time, said part of his mandate as the new top executive in Suffolk’s downtown office is to secure a bigger piece of the infrastructure work, especially at LAX.

The public infrastructure investment comes as Los Angeles is looking toward its next stage as a global city.

“We’ve been through an economic recovery, and now we’re focusing more on the future,” said Somjita Mitra, director of the Institute of Applied Economics at the Los Angeles County Economic Development Corp. in downtown. (Mitra’s boss, Chief Executive Bill Allen, makes a repeat appearance on the LA500.) “It’s all about what we need to do to make Los Angeles a place we want to live 10 years from now and 20 years from now.”

Accelerating this infrastructure drive is Los Angeles’ commitment to host the 2028 Summer Olympic Games and some of the 2026 FIFA World Cup, which spans the United States, Canada and Mexico.

The Los Angeles County Metropolitan Transportation Authority, for example, has taken 28 rail and road projects already on its books and is fast-tracking them for completion by 2028. This includes the long-awaited subway to Westwood.

And Los Angeles World Airports, the city agency that runs LAX, is pushing to complete a people mover, numerous terminal renovations and all other parts of the $14 billion LAX overhaul by 2028, on top of the recently revealed new Terminal 9 and concourse extension to Terminal 1.

Los Angeles is able to make all of these infrastructure improvements due to a confluence of funding measures and the end of a 15-year political logjam at LAX. In 2008 and 2016, voters approved sales tax increases that together are bringing in more than $1 billion annually for rail and other mass-transit projects managed by the county’s transit authority and its chief executive, Phillip Washington, another LA500 veteran.

And at the start of this decade, the overhaul plan for LAX took shape — this time without the intense political opposition from neighboring communities that had sunk previous expansion and renovation efforts. Current LAWA Chief Executive Deborah Flint makes a repeat appearance on the LA500 list.

On top of the voter-approved funding, the county is receiving close to $1 billion a year in gas tax money thanks to the state Legislature, which passed SB 1 in 2017 to boost funding for roads and transit operations.

“What’s happening now is all these dollars are landing on the street and in the hands of construction contractors at around the same time.” said Darin Chidsey, interim executive director for the Southern California Association of Governments in downtown. “It represents an unprecedented amount of state and local funding for infrastructure projects here in Los Angeles County.”