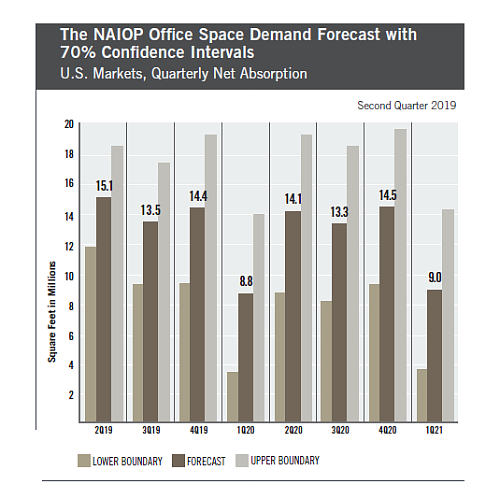 The U.S. office market continues to expand ahead of forecast, posting 18 million square feet of net absorption in the fourth quarter of 2018 and 11 million square feet in the first quarter of 2019, according to the NAIOP Office Space Demand Forecast. Continued economic growth and increases in job creation are likely the main forces behind these levels of new leasing.

With first-quarter U.S. GDP growth of 3.2% annualized and a current unemployment rate of 3.6%, U.S. office space demand should remain strong during 2019. Report authors Dr. Harry Guirguis, Manhattan College, and Dr. Joshua Harris, New York University, expect demand to register an average of 13.5 million square feet of net absorption per quarter, which will moderate slightly to an average of 12.7 million square feet per quarter in 2020.

This forecast is driven by continued expected strength in office-using employment, which has grown twice as fast as general employment. According to the U.S. Department of Labor’s March 2019 jobs report, the primary office-using sector, Professional and Business Services, grew 1.22% year-over-year compared to just 0.6% for total nonfarm employment.

The continued strength in the office demand forecast for 2019 also likely represents a partial reversal of the recent trend in decreasing square footage per employee. The faster pace of leasing in 2018 through the first quarter of 2019 appears to be a response to high rates of office-using employment growth in 2016 and 2017. Due to job creation and sustained office-leasing activity, some tenants may have reached the limits of their office footprint reductions. As firms grow in response to economic opportunity, they may feel pressure to add more space per employee. However, newer coworking concepts such as WeWork are just beginning to expand into smaller markets. Therefore, the potential exists for unpredictable future disruptions.

While the possibility of a late 2019 or early 2020 economic slowdown seemed plausible at the end of last year, current economic data suggests that the next downturn is more likely to occur in 2021. Overall job creation, unemployment, consumer confidence and interest rates all support the continued economic growth experienced for the past several years. The authors expect U.S. GDP growth and job creation to moderate by the end of 2019 and during 2020, which means the forecasted rate of net office absorption is expected to be lower in 2020 than 2019.

Information for this article was provided by NAIOP, the Commercial Real Estate Development Association, which is the leading organization for developers, owners and related professionals in office, industrial, retail and mixed-use real estate.