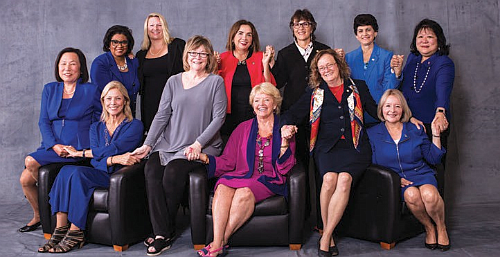 When I reflect on women and leadership, I am convinced that as far as we have come, we still have far to go. A recent Harvard Law School Forum on Corporate Governance and Financial Regulation highlighted that the number of top female executives in 2018 remained shockingly low, with only 5 percent of the largest publicly traded, U.S. companies having a female CEO. As the President of California State University, Northridge (CSUN) and someone whose career has been spent in higher education, academia is the world with which I am most familiar. Yet, what I see in higher education translates to most industries today.

Although we fare better, representation is unacceptably low among academic leadership — according to the American Council on Education’s (ACE) American College President Study 2017, only 30 percent of the nation’s college and university presidents are women, representing an increase of just four percentage points since 2011. This inequity in numbers is also reflected in the “pipeline” in academia from which university leaders are usually drawn — that same ACE study found that just 32 percent of full professorship positions at universities were held by women and, in a study looking at business schools, 25.2 percent of deans, 33.7 percent of associate deans, and 26.2 percent of academic department chairs were women, despite the fact that women now earn the majority of college degrees. The lack of diversity on university governing boards that hire presidents also plays a factor.

We can take pride in knowing that higher education in California actually does somewhat better in this regard. Women now lead both UC Berkeley and the University of Southern California, and in the California State University (CSU) system, of which CSUN is part, more than half of the 23 campuses are led by women.

To mark this milestone, the CSU recently profiled this group of leaders, touching on their values and personal path to executive leadership (available at https://www2.calstate.edu/women-and-leadership). While each of us, of course, had our own path to a university presidency, there are a remarkable number of experiences and challenges we share — such as often having to prove yourself twice over or having to show that you are credible and ‘worthy’ of positions; not having women role models to show what is possible; sometimes being the only woman in a meeting and striving to be heard and not dismissed or talked over; and being evaluated by a different set of standards. When I am among woman presidents, we often talk about such experiences, not only from the past but even currently. Some of us — particularly women presidents of color — have also been criticized for not “looking” like a college president, and concerns about women being less capable in managing other university enterprises like athletics, facility construction and finance have sometimes been expressed. Fortunately, there were also positive experiences — particularly being recognized for our skills and abilities, being mentored and given opportunities to develop and move up.

As in other fields, women in academia and university leadership also struggle with a work-life routine that emerged from the needs of men in the last century, who would generally come home to a hot meal and children ready for bed – courtesy of their wives. Today’s professional women need flexibility and work-life balance initiatives that make room for childcare and family needs. Women who lead organizations often juggle multiple roles and responsibilities between home life, aging parents and the workplace — the ACE report on college presidents referenced above reported that 32 percent of women presidents changed their career progression to care for a dependent, compared to 16 percent of men. Forward-thinking organizations that seek the best and the brightest will be cognizant of that reality and adept at navigating solutions. It has been shown that the varied backgrounds, experiences and leadership styles of women benefit contemporary organizations. Boston Consulting Group has reported that management teams that are diverse actually foster innovation, are more effective at problem solving and drive stronger bottom line performance.

Some of our struggles are not that different from what women dealt with 20 or more years ago. It is our responsibility to actively participate in the solution. Young women aspiring to leadership need mentors who will coach them on speaking their minds and becoming resilient. Executive leadership programs should cultivate a network of women in an organization who can support each other and those who are early-career, providing advice, professional development, and mentoring. Mid-career women also benefit from sponsors who take an active role in advocating their advancement. In all instances, women need to support other women leaders. We do a disservice when we do not champion our female colleagues.

Successful leaders often blend traits that include a balance between assertiveness, social skills, emotional intelligence, hard skills, integrity and the ability to inspire others. Women certainly do not all share the same personality traits or have a single, “female point of view,” but those of us who are able to meld confidence and sociability may find it easier to navigate leadership roles. Through my own background and training in Social Work, I learned crisis intervention, problem solving, communication skills, empathy and respect for everyone, no matter who they are. These are skills I use on a daily basis to be effective in a way that is both directive and supportive.

Above all, women who aspire to leadership must learn to be true to who they are. In the 1980s, when women first truly began to break through the glass ceiling, they often made the mistake of thinking they had to emulate the style and behaviors of men who occupied the c-suite and boardroom. This was even apparent in the clothing styles – “power dressing” involved big shoulder pads and wearing a female version of a man’s suit. Today, we have learned that you have to bring your own experience and voice to leadership, and above all, be your own, authentic self.

Women may still be breaking through career barriers, but I believe the future for women in leadership is brighter than ever. I applaud the Los Angeles Business Journal for shining a light on the continued evolution of women in the c-suite through the Women’s Council Awards, and I am encouraged to know so many sharp, savvy women in LA are paving the way for those who are coming next.