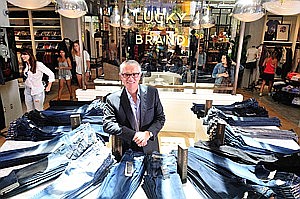 Guess Inc. announced the departure of its executive officer Victor Herrero on Feb. 2, sending its stocks tumbling as much as 14 percent on Jan. 28.

Herrero will be replaced by Carlos Alberini, Lucky Brand chairman and executive officer. Alberini was formerly the president and chief operating officer of the company from 2000 to 2010.

Co-founder Paul Marciano resigned his position as Guess? chairman of the board last summer after an internal investigation into allegations of improper contact. According to an SEC filing, Marciano settled with five people for a total of $500,000 over claims of inappropriate behavior that included inappropriate comments and texts, and unwanted advances, including kissing and groping.

The company said Marciano will remain chief creative officer, on an “at will” basis.

During the transition, Maurice Marciano will be acting as interim chief executive officer.