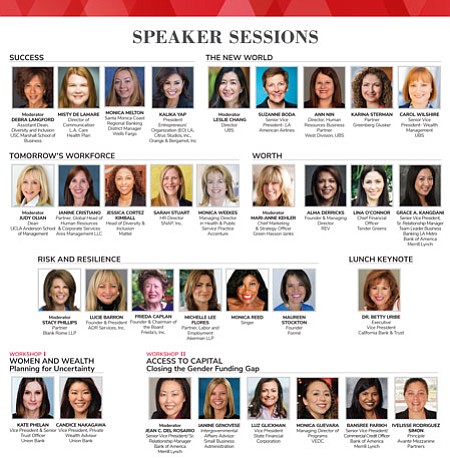 Grace Kangdani is the Senior Relationship Manager Team Leader in the LA Metro Business Banking team. Kangdani works with emerging and growth companies in the Greater Los Angeles area in a number of industry verticals, including consumer products, food, and technology/media. She is also a mentor for teammates across the company, through Business Banking – Diversity & Inclusion Council, Business Banking – Leadership Council, the Asian Leadership Network, and LEAD for Women.

Lina O’Connor is the Chief Financial Officer at Tender Greens. She joined the restaurant company in 2012 with a mandate to develop the company’s finance and accounting infrastructure. She began working with the Tender Greens team in 2011 during which time the company has grown from four to 27 locations. Most recently the company opened its first New York restaurant with plans to expand across the eastern seaboard and beyond. She played an instrumental role in negotiating the partnership with Danny Meyer’s Union Square Hospitality Group and has raised several rounds of equity and debt in her time at Tender Greens.

Lucie Barron is the Founder and President of ADR Services, Inc., the second-largest dispute resolution provider firm in California. Hailing from Australia, Barron studied psychology in Adelaide before going on to obtain her Masters in Psychology at the University of Sydney. After working as a psychologist for several years, she earned an MBA from McGill University in Montreal. Opening its doors in 1994, her company started as a single subleased office space with access to a pair of conference rooms. ADR Services now operates in seven offices across the state, with over 135 conference rooms and 130 retired judges and attorneys.

Founder & Chairman of the Board, Frieda’s, Inc.

Dr. Frieda Rapoport Caplan is a genuine produce industry trailblazer who in 1962 became the first woman in the U.S. to own and operate a produce company on the all-male Los Angeles Wholesale Produce Market. A true innovator, she led the charge in buying and selling previously unusual and new-to-market specialties like brown mushrooms, Sunchokes, and spaghetti squash. Her grit and determination earned her the title “Queen of Kiwifruit” for her successful introduction of kiwifruit to the American market. She went on to introduce more than 200 exotic fruits and vegetables to American consumers, including dragon fruit, habanero peppers, jicama, and Stokes Purple sweet potatoes.

Stacy D. Phillips is a Certified Family Law Specialist and one of the country’s most well-known and respected family law practitioners, having achieved virtually every honor available to a lawyer for her work. She is also an author, sought-after commentator, speaker and writer, philanthropist, and a tireless advocate for children and families.

Monica Reed has worked as a sessions singer on many commercials, recordings, videos, and television. She has performed as a professional backing vocalist touring the world for over 30 years with a broad array of artists, including legends such as James Brown, B.B. King, Roger Daltrey of The Who and Sting. She has also arranged backing vocals for several high profile music projects including Sting’s hit “Mercury Falling” album.

Maureen Stockton is a Los Angeles native and UCLA graduate with a successful 25-year entrepreneurial track record. Her passion and career as an entrepreneurial inventor started at UCLA with her founding of the Undergraduate Entrepreneur’s Association. She later honed her marketing skills at JAKKS Pacific Inc., the publicly traded toy company, where she created $250 million in new revenue through innovative products and new retail merchandising techniques. Building on her past entrepreneurial successes, in 2015 she founded a new consumer products company, Formé, makers of the Formé Shoe Shaper, which makes any woman’s shoe more comfortable in one hour.

Leslie Chang, who serves as Director at UBS, has been in the wealth management industry since 2000 and is currently a Financial Advisor and serves as the Assistant Market Head for the UBS Los Angeles Market. Chang received her Bachelors in Psychobiology from UCLA and has a MBA with a concentration in Finance from the USC Marshall School of Business.

Ann Nin is a Divisional Human Resources Business Partner for UBS Wealth Management’s West Division. She is responsible for providing strategic human resources advice, together with business-aligned partners for talent development, talent acquisition and reward. She joined UBS in 2007 from JP Morgan where she started her career. Nin has over 25 years of human resources experience in the financial services industry.

Karina Sterman is a partner in the Litigation and Employment Law Departments of Greenberg Glusker. A creative and ardent advocate for her clients, Sterman defends businesses in class action and individual employee lawsuits.  With significant experience in “behind the scenes” counseling on wage and hour and other employment law compliance, Sterman deploys customized business minded employment strategies to avoid litigation and costly long-term mistakes. In addition to being a published author and frequent speaker on employment law, Sterman proudly maintains a Martindale-Hubbell rating of AV Preeminent.

For 21 years, Carol Wilshire, who serves as a Senior Vice President of Wealth Management at UBS, has provided comprehensive financial planning services to executives in the legal, aerospace and entertainment fields, as well as women who are recently separated or divorced. She was recognized by Forbes magazine as a Top Women Wealth Advisor 2018, and as a Forbes Best in State Wealth Advisor 2018.

Jessica Cortez Kimball is an Human Resources Strategy professional who currently leads Diversity and Inclusion at Mattel, Inc. Kimball and her team are in the process of re-imaging what D&I looks like at Mattel, focusing on the powerful impact it can have on Mattel employees as well as children throughout the world via Mattel’s wide-reaching products. Kimball holds a BA from Yale University and an MBA from UCLA Anderson School of Management.

Judy D. Olian, Ph.D., has served for the past 12 and a half years as the Dean of UCLA Anderson School of Management and John E. Anderson Chair in Management. On June 30, she stepped down from her successful run leading the School to become president of Quinnipiac University.

Sarah Stewart is the Human Resources director at SNAP, Inc., the Venice-based software company best known for bringing Snapchat to the world. Prior to her work at Snap, Sturat served as Director of Integrity & Governance and People Operations at Google, where she had worked since 2007.

Monica Weeks, Managing Director in Health & Public Service Practice, is responsible for Accenture’s work with several national providers and health care payers in North America and is responsible for the Health and Public Service management consulting practice on the West Coast. She specializes in assisting clients with major transformation efforts focused on business strategy and performance improvement.

Misty de Lamare is Director of Communications at L.A. Care Health Plan, the nation’s largest publicly operated health plan. In this role, she is responsible for the organization’s internal and external communications. Also, de Lamare is an inaugural member of the health plan’s Women in Leadership Employee Resource Group and its Mentorship program. She holds a master’s degree in public relations from Syracuse University.

Debra Langford of USC Marshall develops innovative programs to increase the culture of inclusion and foster diversity for students, faculty and staff. Langford has a career in Media and Entertainment, spanning 25 years. As a Global Vice President of two  of the world’s largest media companies, she served as the Corporate VP of Inclusion and Business Diversity, for NBC Universal and the Corporate VP, Strategic Sourcing for Time Warner, creating successful programming to increase diversity.

Kalika Yap is a thriving serial (and concurrent) entrepreneur whose businesses include award-winning brand agency Citrus Studios, Luxe Link, the Waxing Co.,  and Orange and Bergamont. As if that wasn’t enough, Yap also currently serves as the President of the Entrepreneurs’ Organization, Los Angeles.

Jean Del Rosario is a Senior Vice President and Senior Relationship Manager for the Greater Los Angeles market in Commercial Banking at Bank of America Merrill Lynch. In this capacity, her responsibilities include leading a team of specialists focused on understanding each client’s unique needs to deliver strategic financial guidance and solutions.

Janine Genovese is an Intergovernmental Affairs Advisor working with city, county, and state economic development departments. She also serves as the CFO for the VA Desert Pacific Healthcare Network and is responsible for the $5 billion budget for eight medical centers serving 1.2 million veterans residing in Southern California, Arizona, and New Mexico.

Luz Glickman is a Senior Business Development Officer serving the Western Region of the United States. She joined State Financial in 1993 and has over 25 years of asset-based lending experience. Her responsibilities include fostering new business relationships and providing working capital for small to medium sized businesses with asset-based credit facilities.

Monica Guevara is responsible for oversight of all business services programs for VEDC where she also served as Credit Administration Manager. Guevara has also worked as a business consultant within a Women’s Business Center and has over 10 years of experience working with immigrant, minority and low-income entrepreneurs.

Bansree Parikh is an SVP and Senior Credit Officer for the Inland Empire and Los Angeles markets for Global Commercial Banking at Bank of America Merrill Lynch. In this capacity, she directly guides clients and prospects on credit capacity, loan facilities, and debt structures with annual revenues from $5 million to $50 million.

Ivelisse Rodriguez Simon has over eleven years of experience in the finance industry including investment banking and private equity. Prior to joining Avante, Simon was a Vice President at Reliant Equity Investors and subsequently at Palladium Equity Partners, where she helped to launch the fund’s west coast office.

WOMEN AND WEALTH: Planning for Uncertainty

Candice Nakagawa is a Vice President and Private Wealth Advisor for The Private Bank at Union Bank. In this role, she partners with a team of specialists in wealth planning, investments, risk management, trust and estate services, and banking. Candice works with high net worth clients to help them build, sustain, and transfer wealth based on their distinct priorities. Nakagawa joined Union Bank in 2000.

Kate Phelan is a Vice President and Senior Trust Officer at The Private Bank at Union Bank. She works with a team of specialists in wealth planning, investment management, banking and trust administration. As a Senior Trust Officer, she manages a wide range of trust and estate matters in accordance with sound fiduciary principles. Phelan brings over six years of experience to her role.

Dr. Betty Uribe is the Executive Vice President at California Bank & Trust, where she heads Commercial and Personal Banking throughout Southern California. For nearly three decades, Dr. Uribe has been transforming business, culture, and people through values based leadership in the Banking and Finance industry. At California Bank & Trust, Dr. Uribe has P&L responsibility for the Greater Southern California Division, a $4 billion line of business covering retail and business banking. The Bank has loans of $8.8 billion and deposits of $10.5 billion.