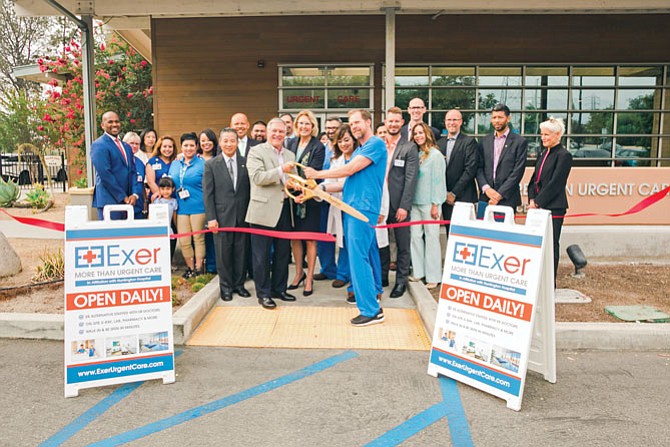 Exer executives with others at ribbon cutting for Pasadena Clinic.

Urgent care clinics seem to be popping up like taco trucks along Los Angeles boulevards, and one health care company just broadened its reach.

Exer Holding Co. of El Segundo opened its ninth clinic in Southern California last month, and claims to be one of the fastest-growing private emergency medical service companies in the region.

“Our focus is simple, to help people feel better, faster, every day,” said Rob Mahan, Exer’s chief executive, in a statement after its Pasadena clinic opened July 18. “By working closely with local hospitals in the communities we serve, we are able to help ease the burden on local emergency departments while also increasing access to the care people want when they need it most.”

The Exer clinic in Pasadena is affiliated with Huntington Memorial Hospital, which previously ran an outpatient clinic in the same spot. Exer employs the employs the same ER doctors that worked there previously.

The clinics feature X-Ray, labs, diagnostics and other services similar to typically offered at hospital emergency rooms. The services are generally provided at lower costs compared with hospitals, according to Exer.

They accept most insurance, Medicare and cash.

Nearly a third of all ER visits in California are not considered to be true medical emergencies, Mahan said.

The New York-based PM Pediatrics, which runs 30 clinics, announced last month it would open its first West Coast location this fall at 8731 Pico Blvd., in Pico-Robertson.

“Dr. Sherman’s unwavering commitment, leadership and expertise in delivering high-quality health care make him the perfect fit to lead the company’s growth in the region,” said Dr. Jeffrey Schor, founder of PM Pediatrics, in a statement.

The number of urgent care centers nationwide grew by 36 percent from 2014 to 2106, to 8,154 clinics, according to the Urgent Care Association. California has 733 urgent care facilities, the most in the nation.

Nearly 40 percent of the urgent care centers in the U.S. are owned by corporations, 16 percent by joint ventures with hospitals, 15 percent by hospitals themselves, 14 percent by physician groups and 10 percent by a single doctor.

New COO for City of Hope

Walker, who joined the Duarte-based research hospital earlier this year as senior vice president in transformation development, replaces William “Marty” Sargeant, who was hired to the post in 2012.

“Jeff has brought a wealth of cancer center and hospital leadership experience to City of Hope,” said Dr. Michael Caligiuri, City of Hope’s president. “He will help guide City of Hope into the future.”

Walker will lead patient care and research operations for the Duarte campus and community practice locations, while overseeing its physical plants and an estimated $1.1 billion in new construction.

He previously served as chief operating officer for Ohio State University Comprehensive Cancer Center and also oversaw the construction and opening of the James Cancer Hospital in Columbus, now the third-largest cancer hospital in the nation.

Local hospitals have achieved recognition for excellence in nursing.