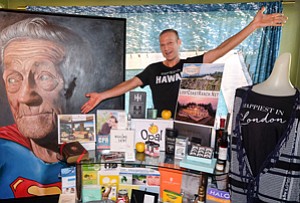 Lash Fary has made a lucrative career of giving gifts to people who have everything.

Fary, 45, is founder of Distinctive Assets, an L.A. marketing company behind what Hollywood calls the “swag bag.”

Stuffed with six-figure assortments of jewelry, cosmetics, clothing, beauty and health products, the latest gadgets, and gift certificates including lavish travel packages to high-end resorts, these unsolicited gifts for Academy Award nominees have become an annual source of media fascination.

“My focus has never been the price,” Fary said. “These artists have just had an incredibly stressful week. Going through the bag is something fun. That for me is the ultimate goal of these gift bags.”

While Distinctive Assets is not the only company in the celebrity gifting business, Fary’s bags consistently garner the most buzz at Oscar time. The week before the awards is perhaps the busiest of Fary’s year as he launches an annual media tour to talk about his company’s “Everyone Wins” gift bags.

Stacy Jones, chief executive of El Segundo’s Hollywood Branded Inc. entertainment marketing agency, said gift bags are a way for companies to give their products or service a little star luster without a high price.

She said businesses are looking for “the perception that your brand is thought so highly of by the event producers or organizers that they gave it the approval to be in the gift bag. It’s relevant enough that they thought that a celebrity would like to have it. It’s a seal of approval. It adds to brand that is trying to cut through and differentiate.”

Companies pay $4,000 to be included in Fary’s bags, regardless of the price of the gift. Fary makes sure the 26 bags end up with the Oscar nominees for best and supporting actor and actress, best director, and the host of the show.

This year’s 40-plus-item gift bag is valued between $100,000 and $200,000. Fary said Distinctive Assets selects items based on pitches from companies as well as by soliciting suppliers.

The cost of items in this year’s bag range from a ChapStick tinted lip balm ($4.99) to the most expensive offering, a three-day stay at Northern California’s Lost Coast Ranch. The mansion has 18 bedrooms for up to 10 guests and a gourmet farm-to-table catering service. Estimated value: more than $50,000.

Fary founded his company in 1999 with an entirely different mission: supply wardrobe to Hollywood productions. Working with costume designers, Fary brought clothing and jewelry to sets in what he describes as a rolling retail store.

Not only did the costume crew select items, he said, but actors began shopping his racks for their own wardrobes as well as for gifts. Colleagues suggested that Fary might have a knack for creating gift bags for the Grammy Awards.

He did, adding the Oscars gift bags in 2002 then expanding to other awards shows including the Tonys and the BET Awards.

He has scaled back in recent years to create gift bags in conjunction with only two entertainment awards, the Academy Awards and Grammys. For the latter, Distinctive Assets remains the official gifter and provides a gifting lounge on site at Staples Center. The company continues to be involved in gifting and other promotions for various star-studded events.

While Fary’s bags are the ones for the Oscar ceremony, a host of other companies continue to offer nominees and others associated with Hollywood’s biggest week a dazzling array of free stuff via personal delivery or gifting suites, where invitees show up in person to take home their choice of items.

Distinctive Assets has never been officially sanctioned by the Academy of Motion Picture Arts and Sciences, which had its own bag until 2006, when tax authorities began examining the practice by the nonprofit organization.

In fact, the academy sued Fary and his company last year for alleged trademark infringement for perpetrating a connection between the gift bags and the Oscars. The suit cited the “unwholesome nature” of some gift bag items, including a vaporizer, sex toys, plastic surgery, and a “vampire breast lift” reportedly priced at $1,900. The 2016 bag of around 50 items was valued at more than $200,000.

The suit was settled the same year, with Fary agreeing not to use academy trademarks and to include disclaimers in company materials stressing that there is no affiliation between his company and the academy. Distinctive Assets may still state that the bags will be delivered to 25 Oscar nominees in five major categories: actor and actress, supporting actor and actress, and director.

“I have no more affiliation with the Oscars than Christian Dior has when a star wears a Dior dress on the red carpet,” Fary said.

Some of the items the academy tends not to like, however, can be what creates the most buzz about the swag bag, said Hollywood Branded’s Jones.

The buzz has been a boon according to Kris Warren, marketing director for Koloa Landing Resort at Poipu on the Hawaiian island of Kauai. The resort, which opened in 2010, has offered gift vouchers in Distinctive Assets’ bags for three years.

“It’s hard being the new kid on the block and trying to get A-list coverage,” Warren said. “This was a really good way to get some media coverage.”

This year, the resort is offering a five-night, six-day package at one of its most luxurious villas in the swag bag. Though, he noted, only about 4 percent of the recipients of the trip vouchers have actually used them.

Not that it matters to Warren. He said the biggest benefit of being included in the gift bags is Fary’s media tour during Oscar week, which Fary said includes about 30 TV and radio appearances as well as interviews for print and online publications.

Warren said he is less interested in fostering social media because the resort stresses privacy for its celebrity clientele.

Not everyone is a swag bag believer, however.

“Executives and/or marketers want their brush with fame, and sponsorship is an easy way to buy access,” Solis said in an e-mail. “Without a plan, however, brands are simply spending money in the hopes a celebrity might say or share something in public or online out of their own free will. That’s rarely the case. Free swag is part of a celebrity’s everyday world.”

On the other hand, Bianca Schlesiger, marketing manager for Atlanta’s Haze Technologies, said the company has seen the benefit of offering a vaporizer for inclusion in Distinctive Assets’ swag bag for the past three years.

While the company’s peak sales are during the holidays, she said, “our peak in press, however, is in February from our participation in the ‘Everyone Wins’ gift bag.”