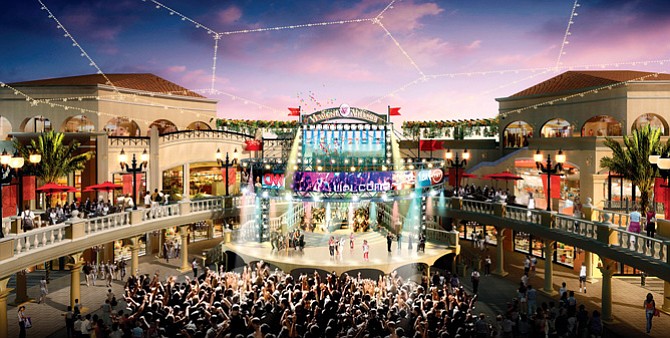 A tug-of-war is brewing over a two-block-long property that has gone largely overlooked in recent years amid the hoopla over the new football stadium project just a few miles away in Inglewood.

Now Los Angeles County officials plan to seize by eminent domain the 4-acre vacant property on the 8400-8500 block of South Vermont Avenue – a patch of land that edges the boundary between the cities of Los Angeles and Inglewood.

County officials, with Supervisor Mark Ridley-Thomas in the lead, want to turn the property into a county-owned development with affordable housing, some retail, a vocational school and public-charter boarding school, and a parking structure.

Sassony Commercial Real Estate Development of Sherman Oaks still aims to turn the land into an outdoor shopping center, and plans to fight the county’s eminent domain proceedings in court.

The Board of Supervisors voted unanimously this month to invoke eminent domain and pay $15.7 million for the property. County officials said the property has remained mostly undeveloped since 1992 and offers a prime opportunity for affordable housing.

Sassony, however, believes the county’s recent move – which came less than a month after the company was able to close escrow on three remaining parcels at the site owned by the former Community Redevelopment Agency of the City of Los Angeles – might have more to do with the proximity to Inglewood’s new stadium complex.

The Vermont Bus Rapid Transit route is also in the works for the area.

“Vermont and Manchester is prime real estate now that the new football stadium is coming out about three miles away from us,” said Jennifer Duenas, chief operations officer for Sassony. “There are numerous vacant lots they can put their project on. There is no reason to stop a project that is already entitled. We have 100 percent site control and we can move forward with this project.”

Sassony held a groundbreaking ceremony in 2015 to highlight its vision for the property, the 200,000-square-foot Vermont Entertainment Village project, which would include a grocery store, pharmacy, restaurants, a banquet hall and stores surrounding an open air plaza. Duenas said the plans could not move forward until it bought the last parcels to ensure parking to handle retail traffic.

Duenas said the Sassony retail center would revitalize the neighborhood by providing about 1,500 jobs as well as fresh food from the grocery store, and serving as a social gathering place with a central courtyard stage and banquet hall. The project would have likely been completed by 2020 if not for the county action, Duenas said.

The contested property sits three to four miles from the Los Angeles Rams’ owner Stan Kroenke’s $2.6 billion, 300-acre Los Angeles Sports and Entertainment District in Inglewood, which will include the Los Angeles Stadium, the new home for the National Football League’s Rams and the Chargers teams. The stadium structure is slated for completion in the summer of 2020. The Super Bowl is scheduled for the stadium in 2022 and opening ceremonies for the Summer Olympics in Los Angeles are slated to be held there in 2028.

The pending project is starting to drive up apartment rents within the city, draw new investments into older properties and attract other development as well, including the new Hollywood Park Community’s thousands of new apartments, a hotel and nearly 900,000-square-feet of office space being built by San Francisco-based developer Wilson Meany and Stockbridge Capital, also of San Francisco.

But the county supervisors stand behind their vision, citing the property’s long-vacant condition since being destroyed by the riots of 1992.

“The County now has an opportunity to construct what will be a catalytic project that would meet many of the needs of the surrounding community,” said Ridley-Thomas, in a statement. “It’s on a prominent corridor where it can catalyze additional investments in all directions.”

Sassony executives view the board action is “unfair and unjust,” Duenas said. She characterized the county action as a backroom deal that ignores the community and vows to move forward with the retail project.

“The main thing is the community has voiced a desire for fresh produce, a pharmacy and retail and that’s exactly what we’re providing,” Duenas said in a phone interview.

South L.A. residents submitted nearly 800 signatures in support of the Vermont Entertainment Village at the county supervisors’ board hearing in early December.

Duenas said Sassony’s project has a number of supporters in the community, including leaders on the local neighborhood council and Rep. Maxine Waters, D-Los Angeles, who sent a letter to the county on Dec. 4 citing strong objections.

Waters said in her letter she found both the county’s action to seize the property through eminent domain – and to potentially pay tens of millions of dollars in taxpayer funds for its development – inappropriate. She asked the county to identify alternative sites within the county for low income housing.

Robert Silverstein, an attorney for Sassony, contended in a statement that the county did not establish –as required by law in cases of eminent domain seizures – why acquiring the Sassony property would be necessary to the county’s proposed project. Silverstein repeated the contention that there are multiple alternative, underutilized sites throughout the county for the project.