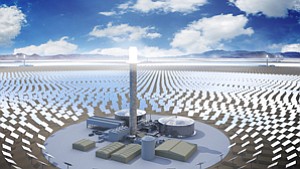 SolarReserve last week announced it is aiming to build a $5 billion, 10-tower solar thermal project – the largest such facility in the world – on a plot of land in Nye County, about 225 miles northwest of Las Vegas.

The so-called Sandstone project would address electricity needs of the California energy market and generate about 7 million megawatt hours a year. SolarReserve’s first solar power project, a 110-megawatt plant outside Tonopah, Nev., powers 75,000 homes in that state as part of a 25-year deal to sell energy to utility NV Energy. The so-called Crescent Dunes project cost $900 million to build and was financed partly by a Department of Energy loan.

The company will be able to achieve cost savings on this new project due to technology and supply chain improvements as well as economies of scale, said Kevin Smith, SolarReserve’s chief executive.

Its power plants use an array of mirrors to focus light from the sun into a central tower filled with heat-conducting molten salt. That heated salt is stored in tanks and used to steam-generate electricity when the power grid demands it. Such technology allows the plant to provide maximum electricity output up to 10 hours after the sun sets, which Smith said is an advantage over the sun-reliant power supply of traditional photovoltaic solar panels.

While the project doesn’t have a dedicated buyer of its electricity, California’s power needs and ambitious green energy mandates should suffice, he said.

“California has some pretty aggressive targets for renewable energy and they are going to need storage to do that,” Smith said.

Investor-owned utilities in the state must increase their energy storage capacity to 1,325 megawatts by the end of 2024, enough to power nearly 1 million homes, and 50 percent of California’s energy must come from renewables by 2030.

The Sandstone project will mostly be financed by commercial debt and equity, and will break ground in two or three years, he said. Its 10 power plants will require about 3,000 workers in total to build and construction is expected to last seven years.

The network offers an online marketplace of popular internet stars for brands to hire as product spokespersons. YouTube is the most popular platform for hiring talent on Famebit, though the service also offers exposure on other social networks. Companies such as Canon Inc., Activision Blizzard Inc., and Adidas have used the marketing service, which has produced more than 25,000 sponsored videos.

Science Inc. Chief Executive Mike Jones, whose incubator nurtured the company, said Famebit’s management was eager to be acquired by the technology giant.

“When Google approached, it became an exciting moment to partner up,” he said. “Whenever you have a platform that is super core to your business, you want to have super-favorable relationships to them.”

Famebit is the third company incubated at Science that has been sold this year. New York Times Co. acquired digital marketing agency HelloSociety for an undisclosed amount in March and Dollar Shave Club sold to Unilever for $1 billion in July.

Famebit, based at Science’s Santa Monica headquarters, has 18 employees. It is not yet clear if it will relocate.

The L.A. tech sector is ahead of other regions in at least one area that it would rather not showcase: sexual harassment.

Some 23 percent of women in the L.A. tech industry said they had been sexually harassed at work, according to a new survey by Santa Monica’s Comparably, a company that tracks information about employee salaries and company cultures.