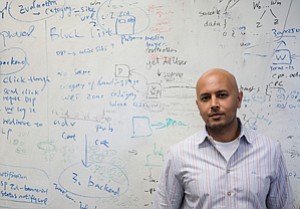 Ad tech firm Engage:BDR is filling up its shopping cart with no immediate plans to check out.

The company, which two months ago paid $7.4 million for Mydiveo, a Hollywood social network and talent discovery platform for musicians and artists, plans to purchase more than 15 companies over the next year, spending roughly $100 million in the process.

The firm said in August that it planned to acquire only 12 companies, but Ted Dhanik, Engage:BDR’s founder and chief executive, said the executive team decided to raise that number last month in order to offer clients a more extensive suite of advertising services.

“Missing pieces is the theme of our acquisition strategy,” Dhanik said, noting the company is already in talks with 11 potential targets. “We’ve had several missing pieces of the company – parts that we felt are instrumental to growth – that we haven’t been able to build on our own.”

The West Hollywood agency specializes in helping advertisers place display and video ads across multiple desktop and mobile platforms, and monetize websites and apps for publishers.

Engage:BDR’s aggressive play comes as the ad tech industry evolves and the quest to establish market share becomes more competitive. Bigger players have begun to acquire smaller agencies as a way to deepen creative capabilities and data-driven insights. At the same time, brands are striving to maximize marketing efforts and cut down on the number of ad firms they hire to place digital ads.

Case in point: Dentsu Aegis Network’s $360 million acquisition of performance marketing firm Merkle in August. Overall, the industry saw 204 mergers and acquisitions in the first half of this year, totaling about $6.8 billion, compared with 85 deals for the same period in 2015, according to global marketing consulting firm R3.

“It’s a smart play for Engage:BDR to look at complementary segments of the industry,” Alexander said. “Instead of being one of the guys getting gobbled up, they’ve started gobbling people up.”

While it’s obviously more cash intensive to purchase companies than to scale organically, Alexander said Engage:BDR can save time that would otherwise be spent developing technology and seeking out clients.

“It saves you six months to a year of development time so you can go to market faster,” he said.

Dhanik, who previously developed strategic marketing initiatives at Myspace.com, co-founded Engage:BDR in 2009 along with Kurtis Rintala, its chief operating officer, and Ken Kwan, who serves as chief information officer. The firm has a staff of 65, including employees at its satellite office in India.

Engage:BDR initially focused its efforts on helping publishers sell display ads but shifted toward video two years ago, with most of its revenue now coming from that format. Dhanik declined to state the company’s revenue but said it sells an average of 6 billion ads every day across several of its ad networks.

He said he hopes the firm will be able to position itself as a media company, as opposed to strictly an ad tech firm, once it’s buying spree is complete.

“The idea is to build an arsenal of marketing components that most of our competitors don’t have,” he said. “Acquiring these missing pieces is faster and more efficient than us building them on our own.”

Engage:BDR is looking at companies on both sides of the advertising industry including video publishers, social media firms, and software developers similar to Hootsuite, a social media management platform, said Dhanik. Most of the companies Engage:BDR is talking to have been around for at least five years, he added.

The company is looking to purchase Web and mobile publishers as a way to sell premium ad inventory directly to clients while minimizing fraud, which the firm said it monitors closely for clients. Dhanik said the potential acquisitions Engage:BDR has targeted in this space generate an average of $20 million to $30 million in annual revenue.

The agency expects to spend more than $100 million on its acquisitions in total. Dhanik said the firm will pay for some of the deals on its own, while it will look to partner with other buyers on certain transactions.

Bringing such a large number of businesses into the fold could be a source of disruption in the office, but Dhanik said the goal is to keep the firms operating independently. However, local ventures, such as Mydiveo, would move into Engage:BDR’s headquarters off of Sunset Boulevard.

“The idea is to keep them running the way they are and keep everyone on board and just capitalize them and grow those companies,” said Dhanik.