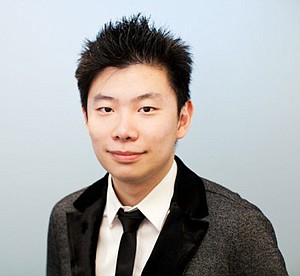 Before he was hit with scam accusations by regulators late last year, Lin Miao promised to bring a splash of glamour to the L.A. tech scene. His startup incubator, Be Great Partners, boasted sweeping views from offices near the top of a Miracle Mile office tower, threw open-bar parties featuring Hollywood club DJs, and courted celebrity and entertainment industry investors.

But when a judge froze Miao’s assets this month, the 27-year-old resorted to a more modest way to keep the business going: asking his parents for money.

Last week, regulators at the Federal Trade Commission agreed to allow Miao’s parents to loan Be Great $125,000 to keep the incubator afloat. The move follows a preliminary injunction ordered by a federal judge earlier this month against Miao, his former business partner, their former company Tatto Inc. and seven related businesses.

The FTC sued Miao and Tatto in December, alleging that he and his former partner conducted a $100 million-plus scam to place charges on people’s cellphone bills without permission.

The injunction means that the assets of Miao and his previous companies will be frozen until the FTC’s case ends, which could be more than a year if Miao does not settle. It also prevents him from personally earning money or incurring debt.

But the court is still allowing Be Great, which Miao founded after reportedly selling Tatto for $60 million in 2011 and is not part of the allegations, to continue operating. He is also allowed to pay property taxes on his Beverly Hills home, which records show he purchased in July for $1.8 million.

Michael Mallow, an attorney at Century City’s Loeb & Loeb who reviewed the case for the Business Journal, said that the injunction signals the case has become “far more serious,” because a judge has ruled that the FTC is likely to prevail. He said regulators could still use Miao’s stake in Be Great if he is compelled to pay back Tatto consumers.

“The concept is that by operating, the business provides value should there be need for consumer redress, but it’s not going to benefit Miao,” he said. “The judge has put extraordinary limitations on Miao’s access to capital in the forms of assets or debt.”

After selling Boston-based Tatto and moving to Los Angeles, Miao founded Be Great last year, promising to invest in 500 startups.

The company aspired to something glitzier than the laid-back reputation of Silicon Beach, with Miao telling media outlets that celebrity power was an untapped asset he wanted to harness. Be Great invested in in at least 24 tech startups, including Dealflicks, MeUndies and Enplug. It also provided co-working spaces with nicer amenities – bathrooms with cologne and solar-powered warm water, a home theater system and club music playing at the entrance.

“Whenever we bring people to meetings, they’ll wonder if they entered a nightclub,” Dealflicks co-founder Sean Wycliffe told website Built in Los Angeles last year. Representatives of Dealflicks did not return a request for comment.

Its dressed-up style drew attention. A Los Angeles Times report of a party thrown by Be Great in September noted that the attendees were “predominantly well-dressed Hollywood types toting Chanel flap bags, an oddity about which several partygoers commented.” Most tech industry parties are more low key and casual.

Miao himself came from humbler origins. According to an account of his life that he published as part of a “Chicken Soup for the Soul: Extraordinary Teens” anthology in 2009, Miao was born in China to a single mother and moved to Australia at age 7, as his mother wanted to get an education and change her life. The following year, his mother met and married his stepfather, and together the family moved to Salt Lake City to be closer to the man’s relatives.

Miao had a knack for technology and entrepreneurship at an early age, spending hours as a child building and fixing computers. He went to garage sales to purchase old computers to repair and sell, and at 11 started the first of many businesses, repairing home computers.

“At the time, my family had just moved to a new country and we were poor and struggling. But not having much made me hungry to have more. I had to try and find a way to get what I wanted,” he wrote.

While in high school, Miao wrote that he completed computer certification programs offered by Microsoft and Cisco, and as a high school senior began teaching eight-week classes on Internet security at the University of Utah to college students and adults. He also built a website called Lin City, an online teen community.

At Babson College in Massachusetts, he started a third business, 7DollarStuff, an online seller of posters and other goods that reached 15 different countries; he sold it in 2005 for an undisclosed sum. While in college, he co-founded marketing firm Tatto with three fellow students and a $100 investment.

Tatto focused on online marketing, building inexpensive Web advertising campaigns to help clients acquire customers online. Advertisers only paid when they acquired a paying customer, as opposed to paying for clicks or impressions. The company blew up, hitting more than $50 million in annual sales by 2009. Miao and his co-founders were among 25 finalists in Businessweek’s Best U.S. Entrepreneurs Under 25 feature in 2007; in 2011, the year Tatto announced it was sold, he was invited to a White House event honoring young entrepreneurs.

But regulators charge that Tatto was a scam. The FTC claims that Miao made at least $29 million from a practice called “cramming,” billing customers monthly for text message-based subscription services such as celebrity news alerts or horoscopes that the customers did not authorize. Miao has denied the charges in court filings.

The FTC further alleges that Miao founded several other companies to continue the scam once Tatto was sued by state regulators in Washington state.

It’s unclear to what extent Miao’s legal troubles are affecting Be Great. A spokesman for MeUndies declined to comment on Miao’s case but said that “whatever is going on with Be Great is not affecting our business as we continue to grow rapidly from month to month.” Just last week, Be Great hosted a social media seminar at its Miracle Mile location.

In addition to its grand plans as an incubator, Be Great wants to be a premier co-working provider. In September, it announced it was going to open nine co-working spaces stretching from Santa Monica to downtown Los Angeles. The company did open a Culver City location last month.

The co-working spaces continue to operate. Marty McDonough, founder and owner of app maker Odyssey Translator, said he continues to work at Be Great’s Miracle Mile space six days a week, at a cost of $295 a month. He said he preferred it to other more laid-back co-working spaces around Los Angeles.

But continuing to fuel the aspirations of local entrepreneurs is going to take money, which Miao can’t provide with his assets tied up. By loaning Be Great the money, his parents could be said to be staying consistent with advice that Miao wrote about in “Chicken Soup”:

“Whenever I went to my stepfather with a problem I faced, he made me realize that most of the time I was just making excuses about my concerns – always focusing on what was out of my control rather than thinking about what I could do to solve the problem. He would always say, ‘Zip the fluff, Lin. Just get to the point and fix the problem.’”