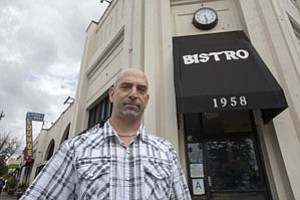 The certified letter that came to Brett Schoenhals’ Eagle Rock restaurant just before Christmas sent him into a near panic.

The four-page letter delivered to Schoenhals’ Coffee Table Bistro from a local attorney’s office warned that within 60 days he would be sued for violating California’s Proposition 65 toxic chemical notification law and that he was liable for fines of $2,500 a day going back one full year – or more than $900,000. The notice invited him to call the attorney’s office. The implication: He could pay the lawyer money to settle the matter.

Schoenhals’ crime? Allegedly failing to post adequate signs saying that the alcohol he serves could cause cancer when consumed and could cause birth defects in unborn children.

“I had a sign posted in the bar, but not at each entrance and not in every room,” Schoenhals said. “And for this I could be fined nearly $1 million and have to fight a lengthy legal case? That would put me out of business.”

Schoenhals is one of scores of restaurant owners and operators in Los Angeles County and hundreds across the state who have received virtually identical notices during the last six months. The notices have come from a handful of attorneys’ offices; they are designed to scare the business owners into calling them and discussing settlement terms; many cases settle for $5,000 or $10,000.

The lawyers claim they are merely helping enforce the 1986 law, which empowers citizens to act as regulators by bringing court cases against companies that use chemicals that are deemed hazardous to workers, customers or nearby residents. That list has since grown to nearly 800 chemicals, including alcohol and certain byproducts of roasting coffee or grilling meat.

But restaurant owners and business groups are calling these attorneys “shakedown artists,” claiming they are exploiting the law to extract thousands of dollars from business owners. They note that the most recent surge in Proposition 65 lawsuits and violation notices came after the state cracked down last year on frivolous lawsuits over alleged violations of the Americans With Disabilities Act.

Earlier this year, after pleas from Schoenhals and other restaurant owners, Assemblyman Mike Gatto, D-Los Angeles, whose district includes Eagle Rock, introduced legislation to crack down on the attorneys. AB 227 would give restaurant owners a 14-day grace period to post all the required signs without fear of lawsuits or major penalties (a $500 civil penalty would still remain).

“Threatening a small business with a lawsuit for serving its customers coffee with their breakfast, a burger with their lunch, or a glass of beer or wine with dinner is absurd,” Gatto said in a statement after his bill cleared a committee hearing last month.

Last week, Gov. Jerry Brown weighed in with a more extensive reform package that would cap attorneys’ fees and settlement funds in Proposition 65 cases and force plaintiffs to submit more proof of violations.

“While Proposition 65 has motivated businesses to eliminate or reduce toxic chemicals in consumer products, it is also abused by some lawyers, who bring nuisance lawsuits to extract settlements from businesses with little or no benefit to the public or the environment,” Brown said in the statement.

The Center for Environmental Health in Oakland, which has filed many lawsuits alleging violations of Proposition 65, said that it supports the intent of Brown’s proposal but has some concerns.

“The governor’s approach may undermine important provisions of the law that have worked for 25 years to protect millions of Californians from unsafe products and pollution of our air and drinking water,” the environmental group’s statement said.

“We are 99 percent behind that bill, with just a couple of small points we are still working out with the bill’s author,” Margulis said.

This isn’t the first legislative effort to rein in Proposition 65 demand-for-money letters and lawsuits: Back in 2003, three bills containing similar reforms were introduced, but were all defeated amid heavy opposition from attorney and environmental groups.

However, Proposition 65-related demand-for-money letters waned in subsequent years because many of the attorneys switched their focus to violations of the Americans With Disabilities Act, which proved more lucrative for them.

Under the ADA, some lawyers sent businesses letters saying, for example, that a railing was an inch too low or a bathroom too high under ADA regulations and the business had to pay $10,000 to the lawyer to keep him from filing a lawsuit.

In the ADA reform, the Legislature essentially banned these kinds of demand-for-money letters related to ADA violations. After the legislation was signed in September, there was an increase in the demand letters under Proposition 65 starting in November.

For some local restaurant owners, the calls for reform of Proposition 65 demand-for-money letters come too late.

Take Kitchen 24, a Hollywood diner that opened five years ago. J.T. Fox, a lawyer who represented the restaurant, said Kitchen 24 received a notice in January from the law offices of Miguel Custodio Jr., a Pasadena attorney who has filed scores of these notices. (See related story beginning on page 1.)

Fox said Kitchen 24’s operators did not know that they had to post Proposition 65 notices for serving alcohol.

“I took a look at that letter and realized that they had us for the violation,” Fox said. “They waited a full year so they could have the maximum amount of penalties at $2,500 a day. So I advised that they immediately put up the signs and seek a settlement.”

“That $5,000 was way less than the cost of a trial and all the potential penalties,” he said.

Fox called the violation notice a bear trap and said the Proposition 65 law needs to be changed.

“Right now, there’s no apparent way to escape without paying,” he said. “There should be a provision allowing for a reasonable curing period. After that, if someone willingly fails to rectify the situation, let them feel the full force of the penalties.”

He added that there’s no state or local agency responsible for notifying business owners that they are likely to use or generate chemicals that are on the massive Proposition 65 list and therefore require warning signs.

“It’s no wonder so many business owners don’t know they are subject to the law,” he said.

Big Daddy’s Fire and Grill, a gourmet hamburger restaurant that opened in Pasadena in the fall, started serving beer and wine in late November. Just before New Year’s Day, the restaurant received a violation notice.

Dennis Constanzo, whose wife, Katherine Constanzo, is one of the restaurant’s co-owners, said they had a Proposition 65 warning sign displayed prominently and that the citizen plaintiff used by Custodio’s firm – who claimed to visit the restaurant in late November and again a month later – simply missed the sign.

“We saw no reason to settle, since we very clearly had a sign,” Constanzo said. “So we decided to mount a defense that would stand up in court.”

Constanzo gathered statements from customers and even a Pasadena city inspector who all said they would be willing to testify in court that they saw the sign. He then informed Custodio’s law firm that he was prepared to fight the violation notice.

“Two months later, we got a withdrawal notice from him,” Constanzo said.

He didn’t hire a lawyer so his fight didn’t cost much money, but he said he did spend a good deal of time on the matter over three months. Nonetheless, he stressed that the whole fight was unnecessary and that reform from Sacramento is needed.

“There’s a simple reform that would shut down most of these shakedown artists in their tracks,” Constanzo said. “Simply require that as part of a certificate of occupancy or alcohol license that Proposition 65 notices be posted and that the inspectors sign off on these notices before granting the certificate or license.”

As for Schoenhals of Coffee Table Bistro, as soon as he received the notice, he said he posted more than two dozen warning signs and sent photos over to the law firm. He then hired an attorney.

He also told his employees that if he had to pay the hefty fines, the restaurant would likely have to close down.

“That was difficult,” he said.

After $1,700 in lawyers’ fees and what he estimated at about 100 hours of his time, he received a notice in January that the law firm was dropping the case.

“While I’m glad that case is over, I’m still worried I might get hit with another violation letter,” Schoenhals said. “That’s why we need the Gatto bill with its 14-day fix-it window.”