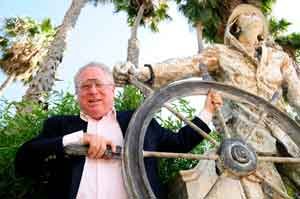 To the thousands who flock to Ports O’Call Village in San Pedro every weekend, the waterfront stretch of shops and restaurants is a great place for fresh fish and cold beer.

But developers who want to tear it down and rebuild on the site say it could be much more – a shopping, dining and entertainment complex with high-end retailers; a fancy ethnic food market; and even a roller coaster and Ferris wheel.

Eight developers, including big names such as Majestic Realty Co. in the City of Industry and Ratkovich Co. in downtown Los Angeles, last month told the Port of Los Angeles, which owns Ports O’Call, that they want to transform the 30-acre site into a destination to rival Santa Monica and other waterfront locales.

For the port, it’s an opportunity to draw tourists – and money – to the commercial side of the harbor. For developers, it’s a chance to build on 30 acres of oceanfront property.

“There’s only so much waterfront property available to be developed,” said Bob Sonnenblick, a principal at Sonnenblick Development LLC in Pacific Palisades, one of the developers proposing to redo Ports O’Call. “Anytime you can get 30 acres on the water with a huge amount of frontage, you can’t go too far wrong.”

Ports O’Call was built 50 years ago and hasn’t been upgraded much since. Now it’s seen by developers, port officials and even many local business leaders as a run-down relic of the 1960s. Ports O’Call is busy on weekends, but doesn’t draw many customers during the week. Much of its retail and restaurant space is vacant.

While developers are optimistic that the right kind of development can bring more visitors and money to San Pedro, some of the factors that have led to the village’s troubles might not be so easily fixed.

Larry Kosmont, chief executive of L.A. development services firm Kosmont Cos., said San Pedro doesn’t have the kind of major attractions that draw visitors to other destinations, such as the beach in Santa Monica.

“It doesn’t strike me as there being a consistent external driver that supports the real estate investment,” Kosmont said. “Given the location, I think there’s no slam-dunk project that jumps out at you.”

The eight companies that responded to the port’s request for qualifications are Majestic; Sonnenblick; McArthurGlen Group of London; Rising Realty Partners and Cal Coast Inc., both of Los Angeles; Battaglia Inc. and Strata Properties, both of Newport Beach; and L.A. Waterfront Alliance, a group that includes Ratkovich and San Pedro firm Victory Group.

Sonnenblick, Strata and Cal Coast spoke with the Business Journal about their plans. Ratkovich, Rising and McArthurGlen declined to discuss their proposals. Majestic, Battaglia and Victory Group did not return phone calls.

Port officials declined to comment because port staff members are in the process of reviewing developers’ qualifications. A committee of port staff and outside redevelopment experts will interview developers this month and likely recommend a single developer to the Los Angeles Harbor Commission in December.

The chosen developer will get a 50-year lease on 30 acres along the waterfront on the port’s main channel. The port already has permits for redevelopment that cover construction of up to 300,000 square feet of “visitor amenities” – meaning no condos or big-box retail development. Also permitted is 75,000 square feet of conference and meeting space. Combined, that’s more than twice the square footage of the existing village.

The three developers interviewed by the Business Journal all said they want to highlight the project’s proximity to a working port, with views of massive ships and cargo containers being loaded and unloaded – something other waterfront developments don’t have.

They also said they would change the look of Ports O’Call and the name, too. It was built to resemble an East Coast fishing village, but developers said a new project should be better tailored to its Southern California site. Beyond that, they differ in their approaches.

Sonnenblick said that the key is to first attract a wider audience. Most of the patrons who visit the village on weekends are working-class Latino families who like the moderately priced offerings of such Ports O’Call tenants as the San Pedro Fish Market. The signature item there is sautéed shrimp with potatoes, onions, peppers and garlic bread, all heaped directly onto a plastic cafeteria tray.

“We’re going to bring in a mix of restaurants and retailers that will widen that demographic by tenfold,” Sonnenblick said. “We’re talking to the best restaurants that are currently there, plus bringing in 10 more to open up other demographic levels.”

His basic premise, though, is that Ports O’Call simply has to be nicer and that spending $50 million to $60 million on a development will draw more visitors.

“By bulldozing the current project and building a brand-new, beautiful, first-class waterfront project, I think that itself will change people’s perception,” he said.

That’s a view shared by Jeffrey Mayhew, owner of Strata. He said the problem with Ports O’Call is that it hasn’t changed over the years. His plan would largely maintain the site’s focus on waterfront shopping and dining while bringing a much needed update, but he didn’t want to go into any more detail.

“Fundamentally, it is a restaurant and entertainment complex on the port,” he said. “What’s there now reflects what those centers were in the ’60s.”

Edward Miller, chief executive of Cal Coast, has other ideas. For the project to be a success, he said a new Ports O’Call has to appeal not just to tourists, but to San Pedro residents who will drive weekday business.

He wants shops and restaurants, too, as well as a Ferris wheel or roller coaster that would bring in visitors. But he envisions a development anchored by a grocery store and ethnic food market, and wants to build office space to help provide everyday customers to other businesses.

“We don’t envision this as a tourist trap destination,” he said. “You need to have development down there that appeals to the everyday resident. There has to be a reason for people who live in San Pedro to come down.”

Tenant leases at Ports O’Call Village will expire at the end of 2014. If the port follows through on its proposed time line, the Harbor Commission will select a developer by the end of this year. That leaves two years to negotiate a long-term lease and hash out the details of the project. Construction could start in 2015.

Whatever the project looks like, businesses elsewhere in San Pedro hope it will help drive more traffic in the neighborhood’s downtown. John Papadakis, a longtime San Pedro resident and former restaurateur who has pushed for waterfront redevelopment since the late 1990s, said today’s Ports O’Call customers don’t visit downtown businesses.

“It’s turned the whole downtown into a swap meet,” he said.

He said the neighboring city of Long Beach successfully transformed its waterfront and should serve as an example for San Pedro, as Long Beach’s turnaround was driven by attractions such as the Aquarium of the Pacific.

“Long Beach 40 years ago was a very dangerous and angry downtown,” he said. “They completely transformed their economic fortunes by redeveloping their waterline.”

Indeed, the Port of Los Angeles has also recently added attractions to the area. The World War II battleship U.S.S. Iowa is now docked permanently along the port’s main channel, where it serves as a floating museum. And the port last year leased two warehouses near the recently expanded Cabrillo Marina to Crafted at the Port of Los Angeles, a year-round market where artisans sell handmade crafts.

Geraldine Knatz, the port’s executive director, said this summer that the goal is to bring a critical mass of visitors to San Pedro, in part to increase traffic at Ports O’Call and make the site more attractive to developers.

The question, though, is whether those investments will be enough to draw new visitors to San Pedro. Kosmont said tourists and locals interested in visiting a waterfront are more likely to head to a beach rather than the port’s industrial waterfront.

But he also said more attractions and more investment could eventually bring crowds.

“These things are a work in progress,” he said. “It may not be Third Street Promenade yet, but it can get there. I think that’s going to be a longer building-out period.”