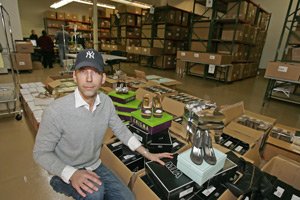 Retail giant Nordstrom last month scooped up HauteLook faster than a savvy shopper will snap up a $425 pair of Tom Ford sunglasses discounted to $129.

The luxury chain’s purchase of downtown L.A.’s HauteLook for $180 million in stock reflects the growing popularity of “flash sale” websites like HauteLook. It’s the first time ever that a brick-and-mortar retailer has acquired a flash-sale site company, showing the importance of such sites as traditional retailers look to tap into the $176 billion U.S. online shopping industry.

Flash-sale sites are Internet versions of designer outlet malls. They typically sell designer apparel and accessories, high-end beauty products and even luxury vacation packages at steep discounts but for only limited periods of time – or flashes.

HauteLook was only three years old when talks began, and the deal was sealed in only a few months, a fairly short time for such a buyout.

However, as these sites grow, the big challenge is for them to get enough stuff to sell – hence the advantage for HauteLook in becoming part of Nordstrom.

Nevertheless, there’s been a wave of L.A.-area companies that have jumped into the online discount game. Among them:

• Modnique, which operates out of a 40,000-square-foot warehouse near Playa Vista. The site is a division of online jewelry auction company Bidz.com Inc., headquartered in Culver City.

• Billion Dollar Babes, on Third Street near the Miracle Mile, was one of the first to get into discounted designer sales. It was acquired last year by San Francisco e-commerce giant Delivery Agent.

The recession fueled the growth of flash-sale sites as cash-strapped consumers hunted for bargains. These sites offer up to 80 percent off retail prices for brief periods of time and often operate as members-only clubs. So, for example, shoppers are given access to the site after submitting an e-mail address that has been approved.

Meanwhile, some major brands jumped in, looking to unload excess inventory without tarnishing their image by selling to mass discounters such as Ross Dress for Less or TJ Maxx.

But as more companies enter the game, some industry analysts say the flash-sale bubble is likely to burst.

Sucharita Mulpuru, a vice president and research analyst at Cambridge, Mass.-based Forrester Research who covers the online shopping industry, said it’s becoming increasingly difficult for flash-sale sites to get enough goods to sell. That’s because there are limited numbers of high-end designer dresses or pairs of pants that can be sold at deep discounts.

“What’s hard is access to good merchandise that’s a value and that you can sell at half off and still make a profit,” Mulpuru said. “The merchandise is the hardest thing about this business, and people don’t seem to get that.”

Thanks to its deal with Nordstrom, HauteLook now has access to a stock of brands the department store carries, she said.

“If anybody is going to have access to this kind of merchandise or get first dibs, it’s a multibillion-dollar retailer like Nordstrom,” she said.

Adam Bernhard, founder and chief executive at HauteLook, recognized that the space is becoming crowded.

“We knew a partner of this magnitude would allow us to continue to scale this business and continue to add some fuel to the fire,” Bernhard said.

He will continue to run HauteLook as a wholly owned subsidiary of Nordstrom, and expects all of the company’s 250 employees to remain on board.

In addition to the $180 million stock purchase price, Nordstrom could pay a performance bonus of up to $90 million for a total of as much as $270 million in stock.

HauteLook is headquartered in three floors of an office building on Flower Street near Staples Center. It also has warehouses in Vernon and Commerce as well as New Jersey.

Meanwhile, other flash-sale sites are finding different ways of staying in the game.

Modnique launched about one year ago amid a flash-sale frenzy. At the time, Bidz.com executives brought in e-commerce veteran Noah Soltes, who founded one of the original discount designer sites, Planet Lulu, to serve as the company’s director of business development.

“We started bringing events like Kenneth Cole – more midtier, well-known brands that were already affordable and we are making them more affordable,” Soltes said.

Meanwhile, HauteLook has added home goods, its fastest growing category, and locally based deals on services such as spa treatments in Los Angeles, San Francisco and New York. HauteLook also expanded its business model with last week’s launch of the Sole Society website. The site is a shoe-of-the-month club. The shoes cost $49.95, and are designed and manufactured by Sole Society.

HauteLook started working on Sole Society during the fourth quarter of last year after realizing that its customers were looking for more shoes. So the company decided to make its own.

HauteLook’s Bernhard said existing HauteLook customers were invited to be the first members of Sole Society, giving the site an air of exclusivity.

“We believe that we are a club and being a member has its privileges,” Bernhard said.

But Forrester’s Mulpuru cautioned that manufacturing is a hard business.

“It’s not easy to do well and your profitability goes down significantly when you do that,” she said. “Especially when you’ve positioned yourself as a half-price retailer.”