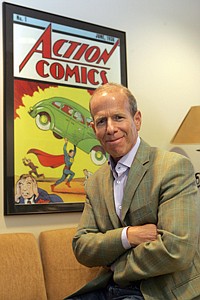 Hollywood studios have long seen Marc Toberoff as a particularly irksome adversary. Nevertheless, he was surprised one day in May to find he had been personally sued by Warner Bros.

Toberoff, who has made a career out of suing studios on behalf of content creators, has something of a history with Warners. In 2005, he won an injunction blocking the release of “The Dukes of Hazzard” movie. He was working on behalf of Robert Clark, who produced a 1974 movie that was turned into the TV show. The studio settled with Clark for a reported $17.5 million and the movie hit the screens as scheduled.

His most recent fight with Warners is over “Superman.” Toberoff represents the heirs of comic book co-creators Jerry Siegel and Joe Shuster, and in 2008, his legal actions allowed the heirs to recapture certain rights to the Man of Steel. Warners’ suit against Toberoff accuses him of having manipulated his clients.

“I’d best describe it as hitting below the belt, where now a lawyer needs his own fleet of lawyers in order to zealously represent his client against a major studio,” Toberoff said.

He is also representing the heirs of legendary comic book artist Jack Kirby in their fight against Marvel Entertainment and parent company Walt Disney Co. over movie rights to such characters as the X-Men, Hulk and Fantastic Four.

Soon after graduating from Columbia Law School in 1980, Toberoff took a detour in the movie industry, including a stint as what he calls a “glorified gofer” for director Robert Altman. But he returned to law after realizing the value of the underlying copyrights to branded properties that movies are based on.

Above all, he thought that artists often got raw deals from the corporate studios.

“Part of what I do is fight for the little guy,” he said. “I’m not claiming to be a saint, but it is a big part of what motivates me and gives me satisfaction.”

Toberoff lives in Malibu with his wife and three children. He’s an avid skier and also still finds time to watch movies. He had considered going to film school before choosing law, and is especially fond of Italian cinema, listing Federico Fellini’s “Amarcord” and Bernardo Bertolucci’s “The Conformist” among his favorite films.