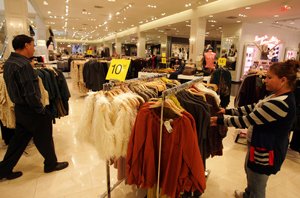 Shoppers at Forever 21 in Cerritos, where the chain moved into a vacant Mervyn’s. Photo by Ringo Chiu.

Forever 21 started life a quarter-century ago in a little 900-square-foot store in Highland Park. But since then, the downtown L.A. fast-fashion retailer has moved into some huge spaces, even swallowing up leases of bankrupt multilevel department stores 200 times the size of its first shop.

Now it’s doing something else no other chain of its type has done: It’s taking a big chunk of space in an existing Sears store.

Forever 21 is scheduled to open a store in 43,000 square feet subleased from the iconic chain at the posh South Coast Plaza mall in the spring.

“If you take every successful apparel company in America, none of them have gone out and taken these gigantic multilevel stores,” said Howard Davidowitz, chairman of New York retail consulting and investment firm Davidowitz & Associates Inc. “They are doing things that other people haven’t done, and I think the Sears deal is consistent with that.”

Why would Forever 21 and Sears, based in Hoffman Estates, Ill., make this unlikely alliance?

The agreement is expected to give the Sears store a more fashionable image and a boost in traffic. Forever 21 gets to take over prime real estate in an upscale mall that lacks a Forever 21 store.

Marshal Cohen, a chief analyst who covers the apparel industry at the Port Washington, N.Y., market research firm NPD Group Inc., said Forever 21 will be able to draw shoppers who otherwise might not be interested in its low-priced inventory that’s mostly for teens and twentysomethings. While Sears, better known for its appliances, might take a step toward changing its hardware store image.

“It helps Sears get past the lawnmower syndrome,” Cohen said.

“When we go into malls and places, we do drive traffic,” Meyer said. “Whether we are in a mall or we are proximate to other retailers.”

Forever 21 and Sears both downplayed the deal. Executives from the two companies declined to provide terms of the sublease and were quick to point out that the new Forever 21 store at South Coast Plaza will not operate as a traditional store within a store, even though it has been widely described as such among retail industry observers.

At the South Coast Plaza store, Forever 21 will employ its own salespeople and operate its own payment system. Customers will get Forever 21 sales receipts, not Sears receipts.

What’s more, shoppers may enter and exit Forever 21 without walking through the Sears portion of the store. If it were a traditional store-within-a-store concept, shoppers would only be able to access the Forever 21 section through Sears.

(However, there are conflicting accounts of whether Forever 21 customers would be able to enter the store through Sears, or only through its own dedicated entrance.)

“Right now, it is one store in Costa Mesa where they’ve leased space from us to build a store,” said Kimberly Freely, a Sears spokeswoman. “It’s an adjacent store to our store.”

Freely said Sears and Forever 21 have reviewed other Sears locations where Forever 21 could take space, but no announcements have been made.

Forever 21’s Meyer said there is no “strategic alliance” between his company and Sears to duplicate the South Coast Plaza model elsewhere. But he didn’t rule out the possibility of more subleases in the future, and said the company was looking at its real estate options.

Forever 21 has become the nation’s fastest-growing apparel company with sales expected to hit $3 billion this year thanks to inexpensive yet fashion-forward clothing and accessories.

The company is expanding its foreign operations as well. Forever 21 announced late last month that it’s planning to debut on the highly competitive European retail scene next month with two big-box-style stores set to open in Ireland and the United Kingdom. (There are already Forever 21 stores in Canada, Asia and the Middle East.)

Forever 21 was founded in 1984 as Fashion 21 by South Korean immigrants Do Won “Don” Chang and his wife, Jin Sook Chang.

After the Highland Park store, the Changs changed the company’s name to Forever 21. In 1989, the couple opened their first store in a shopping mall: a 5,000-square-foot space in the Panorama Mall in Panorama City. Since then, Forever 21 has expanded to more than 460 stores in the United States and internationally.

Forever 21’s business model of contracting with local clothing manufacturers has allowed the company to stock its stores’ with fashionable garments quickly – a key aspect of the company’s success.

As a result, Forever 21’s been expanding beyond its core offerings of contemporary women’s apparel. In recent years, the chain has started to sell men’s and children’s clothing, and accessories such as shoes, handbags and jewelry. It also has created different clothing brands, including the bohemian-inspired Heritage 1981, the plus-size Forever 21+ and the couture-inspired Twelve by Twelve.

Forever 21 began opening standalone stores for some of its lines, such as Heritage 1981 and ForLove21, which sells accessories and intimate apparel. But more recently, the company’s gained a higher profile by taking over large spaces, including many shuttered Mervyn’s, to incorporate all of its offerings under one roof. As a result, Forever 21’s newer spaces resemble department stores, with each collection differentiated by décor.

“We’ve been expanding our store base to provide more categories,” Meyer said.

Meanwhile, Sears, which financier Eddie Lampert acquired and merged with Kmart in 2004, has been struggling to establish its apparel business, especially among young women. Retail experts said Sears’ deal with Forever 21 will give the department store a much needed makeover while bringing in rental revenue.

Forever 21, which is building out its space in the Costa Mesa Sears, gets to take up about 15 percent of Sears’ anchor location in one of the country’s toniest shopping malls.

The company has been able to expand rapidly thanks to its ability to create stores in a variety of sizes and configurations – Forever 21 stores aren’t carbon copies. For example, the one in the Sears space is 39,000 square feet on the first level and 4,000 square feet on the second. By comparison, the 90,000-square-foot Forever 21 at Times Square occupies four floors.

“That gives them more opportunity to grow because they are flexible with real estate,” Davidowitz said.

But could Forever 21’s hip image get tarnished by being associated with Sears, which isn’t known as the trendiest of retailers?

“You could argue that,” said NPD’s Cohen, “but probably not. I don’t expect that Forever 21 will dilute their core product line that they carry in the stores.”

While Forever 21 snapped up space from Sears, the company has also capitalized on the misfortunes of upscale retailer Saks Inc. and its Saks Fifth Avenue department store chain. Forever 21 is set to take over the soon-to-be-closed Saks stores in Mission Viejo and Charleston, S.C.

“In each case, if you analyze what Forever 21 did, it relates to acquiring opportunistic real estate and making lemonade out of lemons,” Davidowitz said.