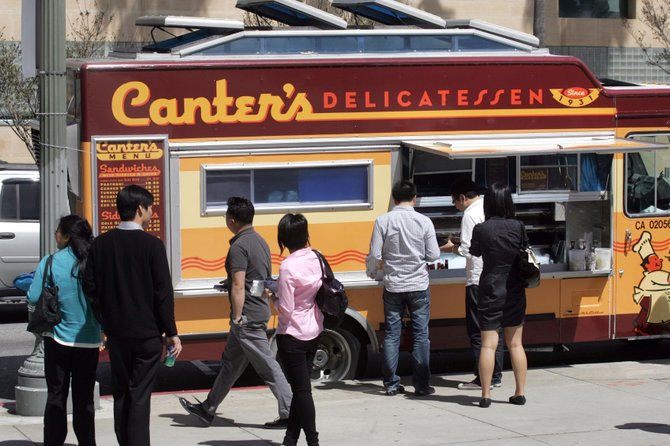 Six months ago, just as the gourmet food truck trend in Los Angeles was getting rolling, Matt Geller got a call from a friend who had just bought a food truck.

Local restaurant owners and police officers were citing any number of regulations to get the trucks to move, Geller’s friend complained. Some truck owners reportedly were told wrongly that they couldn’t be within 100 feet of a restaurant business. Others said they weren’t allowed to park in certain zones more than half an hour. Truck owners wanted to know which regulations were legitimate, and they wanted to push back.

“He asked me to help organize,” said Geller, a former restaurant owner with a law degree from UCLA.

Today, Geller is chief executive of the SoCal Mobile Food Vendors Association, which boasts more than 60 members out of an estimated 90 gourmet food trucks in Los Angeles. The organization, which has attorneys on retainer, has already tapped into the power of a Twitter-mobilized fan base to lobby against restrictions and even endorse a political candidate.

Now, the group faces its biggest test yet in a pair of City Council motions introduced by Councilman Tom LaBonge on June 11. LaBonge’s district includes a Miracle Mile strip where more than a dozen food trucks line up daily. He is seeking to ban food trucks from parking in metered spots in Los Angeles and to set up special parking zones for them.

“I really base my administration on the broken windows concept,” LaBonge said. “I do not want to see the Miracle Mile and other parts of the city face a vacancy rate where you have a challenge to the existence of what the neighborhood should be. Then it becomes a free-for-all in the street if we don’t have this discussion.”

LaBonge, whose motions will be reviewed by the City Council’s transportation committee in July, wants to restrict food trucks to no more than maybe “one space per every other block,” and wants to explore the possibility of enhanced fines or towing vehicles that don’t comply.

Saying that LaBonge’s proposals would hurt their business, the newly organized food trucks have been fighting back. An online petition has gathered more than 2,000 signatures. Tens of thousands of fliers are being printed out and distributed to customers. And the trucks are asking online followers to contact LaBonge and Councilman Paul Koretz, who seconded LaBonge’s motion.

“We have 50,000 Twitter followers in Los Angeles,” Geller said. “This is not a traditional organization that’s only as powerful as its membership.”

Geller said the MFVA is modeled after the Asociacion de Loncheros, which formed in 2008 to combat an ordinance passed by county supervisors that banned taco trucks from staying in one spot longer than an hour. The ordinance was lobbied for by brick-and-mortar eateries in East Los Angeles and was backed up by a $1,000 fine and up to six months in jail. A legal challenge brought on behalf of the taco trucks overturned the ordinance in June of last year.

Erin Glenn, chief executive of the Loncheros, which represents about 300 of an estimated 2,000 traditional taco trucks in Los Angeles, said that her members have long known not to cluster together or operate near brick-and-mortar restaurants. The new gourmet trucks on Miracle Mile, which serve everything from Brazilian beef to Korean tacos, have now unfairly created a problem for taco trucks all across the city, she said.

“To have to deal with this issue when we worked so hard in the county and city to say, ‘Look, we’re operating according to the rules,’ – to have this new group of vendors come in and not take into account anything we’ve done – is kind of a slap in the face,” Glenn said.

Still, she said her group is working with the MFVA and credited the new group with mobilizing to protect its rights. “I think they’ve been successful. They know how to utilize social media and that’s worked out really well for them,” she said.

The MFVA also has been fighting an effort in Santa Monica to shut down a designated food truck lot there, and has even endorsed a sympathetic state assembly candidate – Betsy Butler, who went on to win the Democratic nomination in a district that represents parts of the South Bay and West Side.

Among Geller’s more mundane tasks is calling local police watch commanders to challenge tickets given to food trucks, and booking members for catering events and food fairs. The track record is impressive for a group that still hasn’t figured out how its monthly meetings are going to work.

“We have a voice at City Hall now,” said Vince Giangrande, who owns the Italian food truck Vesuvio. “Before, we didn’t have anything. We were just a bunch of trucks. Now we’re a group.”