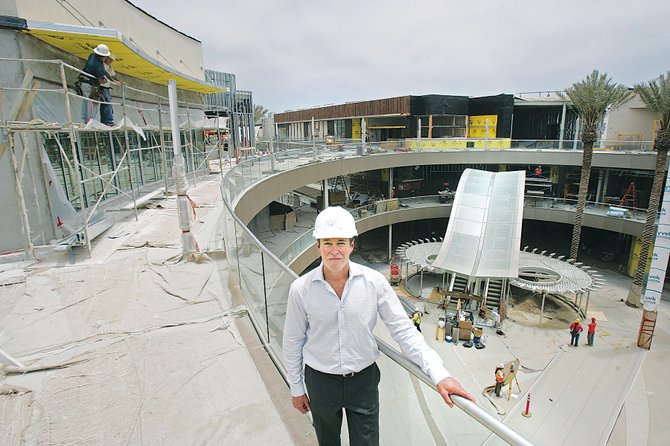 Santa Monica Place is swarming with hundreds of plywood-toting construction workers feverishly working to complete the shopping mall for its August reopening.

And executives at Macerich Co., which owns the shopping mall, can’t wait for the dust to settle. That’s because it’s been a long – a very long – road to renovating the mall.

In fact, Macerich executives said there were moments when it seemed as if the project would never get done.

“You just didn’t know if there was a light at the end of the tunnel,” said Tracey Gotsis, executive vice president of marketing and development for Macerich. “But I can say it was well worth it all.”

The company first considered mall renovation plans in 2001. It spent several years on two plans – the last of which was so big it drew community outrage. So Macerich unveiled a scaled-down third proposal, which called for opening up the enclosed mall, removing its roof, and essentially making Santa Monica Place an extension of the Third Street Promenade next door. That plan received approval in late 2007.

But when construction finally started on the $265 million renovation in April 2008, the economy soon collapsed and consumer spending declined. That slowed things down again. The projected 2009 opening was put off.

The company found itself trying to pre-lease its 550,000 square feet of retail and restaurant space during a recession that has been hard on retailers.

“Timing wasn’t on our side,” Gotsis said.

Macerich finalized lease deals about a year later than planned. But the company has signed leases or received commitments for 70 of the more than 80 spaces at the mall. Retailers include Kitson L.A., Nike, Louis Vuitton and 7 For All Mankind.

Doug Roscoe, who became property manager of Santa Monica Place in 2008, said Macerich expects the reopening to make a big splash. But the real picture will become clear when the excitement dies down.

“After it is open a full year, we can start to get comparable sales and analyze were we are and what kind of benchmarks we’ve reached,” he said.

Santa Monica Place’s first year back in business still could be bumpy. Although the economy generally has improved, national retail sales dropped in May by the largest amount in eight months, suggesting that consumers still may not be in the mood to drop big bucks.

“I would be ready for some impressive results,” he said.

“We think it will be one of the great centers in the United States,” Coppola said. “And one of the most exciting centers that will open for a several-year period.”

Macerich, the nation’s third largest mall owner and operator, purchased the Frank Gehry-designed Santa Monica Place in 1999 for $130 million. At the time, the mall had fallen out of favor with shoppers, too many of whom were only passing through on their way to the popular Third Street Promenade.

Soon after the acquisition, Macerich executives began thinking up ways to bring back the mall’s luster.

In its initial concept, Macerich wanted to extend Third Street Promenade through the building of the enclosed mall, construct the parking garages underground and add 14-story towers with residential and office space. But executives nixed the proposal because they didn’t think the design would bring foot traffic to the second-floor shops.

Macerich introduced a second and even more ambitious proposal in 2004, which called for tearing down the mall and replacing it with retail space, three 21-story residential towers, an office building, three underground parking levels and park space. But the plan sparked fierce opposition from Santa Monica residents and some city officials who were outraged by the highly dense design.

“I think the community spoke to Macerich directly about the plan,” Rawson said. “They had tried to be innovative. Santa Monica wasn’t ready for that kind of approach.”

“So we had to take a breather and put the site plans away,” she said.

At the same time, Macerich had to wait for Federated Department Stores, which had acquired May Department Stores Co., to determine whether it would close Robinsons-May, one of two anchor tenants. That store was shuttered, which allowed Macerich to purchase the building in May 2006 and later lease the space to Nordstrom Inc.

Through 2007, Macerich was working with community members and city officials on a third plan.

“That was a year of reconciliation with the community,” Gotsis said. “We got feedback on what we could do.”

Macerich teamed up with Jerde Partnership, a Venice architecture firm, to design a scaled-down plan. The proposal called for removing the rooftop to create an open-air dining deck and connecting the mall to the Third Street Promenade. There was to be no residential units and no substantial office space, and the retail space, at 550,000 square feet, was about 20,000 square feet less than the old mall.

Community members and city officials endorsed the plans, and the California Coastal Commission and Santa Monica’s Architectural Review Board gave the project approval in December 2007.

Macerich also had to overcome resistance from restaurant owners, who were wary about setting up shop on the third-floor dining veranda. Although the veranda has ocean views, it is away from foot traffic.

Restaurateurs also were concerned by plans for seven upscale restaurants on the deck – more competition than usual for such a mall. What’s more, there has been a decline in the restaurant industry as consumers cut back spending.

But Macerich assured restaurateurs that the Santa Monica market could support them. It held some roundtable discussions with them and helped develop a shared marketing plan. Macerich also pledged to hold regular events on the third floor to drive traffic.

So far, Macerich has leased six of the seven restaurant spaces.

“A lot of sweat equity was put into the mix and business planning with each individual restaurateur,” Gotsis said.

Macerich is now working to secure leases for the Market, on the third floor with the restaurants, set to open in late 2010. The section is comparable to San Francisco’s Ferry Building, which includes gourmet food stores and cafes.

Finally, Macerich now has to do some marketing to let consumers know that the mall soon will be open for business again.

“That’s a big challenge for us, to get out there and say Santa Monica Place is now open and it’s new and different and a place to hang out,” she said. “It will take us a year to get that new vibe out there.”