Who’s Building L.A: Seismic Code Changes: What is the Update and How Does it Affect You? 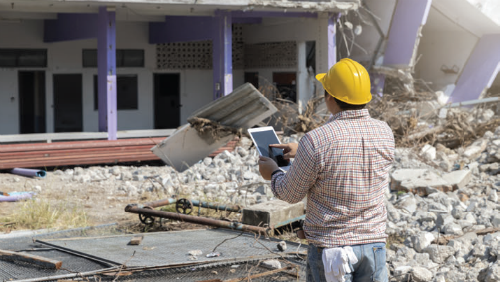 In October 2015, the City of Los Angeles passed Ordinance 183893, which requires the retrofit of pre-1978 buildings to improve the performance of buildings during earthquakes. The ordinance flagged two types of buildings: wood-frame soft-story and non-ductile concrete. This article aims at providing background information to the origin of the ordinance passed in 2015 and looks at the resulting requirements, consequences, and potential liabilities for building owners.

When it comes to seismic events, many Los Angeles residents remember the 1994 Northridge earthquake. During this event, concrete buildings that were constructed prior to the 1976 Los Angeles City Building Code provisions generally performed poorly and collapsed, ultimately causing 57 deaths and approximately $50 billion of damage in today’s dollars. After the earthquake, the City debated how to properly update the code to meet seismic requirements, but changes did not surface immediately.

Everything changed in the early 2010s. After major seismic events in New Zealand, Haiti, Chile, and Japan, earthquake codes became top of mind in cities around the world. January 2014 was especially significant in Southern California, when the Los Angeles Times published an article detailing a list of 1,500 concrete buildings that the University of California identified as potentially at risk of collapse during a future seismic event. The revelation was the catalyst for the creation of the Los Angeles Mayoral Seismic Safety Task Force, which recommended code changes via its “Resilience by Design” paper published in December 2014. Ultimately, these code changes were passed via Ordinance 183893 in October 2015.

So, what exactly is required as part of this ordinance, and what has happened since it passed?

The Los Angeles Department of Building and Safety (LADBS) identified 13,500 soft-story structures built pre-1980 that require mandatory seismic retrofitting. Wood-frame soft-story buildings are generally defined as multi-story structures with large openings on the ground floor, with little to no bracing. The buildings are generally low-rise apartments and condominiums with large openings such as garage doors and/or large retail windows. The timeline to complete the retrofit was seven years through a three-step process: Step one, determine retrofit requirements by 2016. Step two, acquire all necessary permits by 2017. Finally, the third step is to perform the retrofits themselves by 2022.

Non-ductile concrete buildings are much further behind in the seismic retrofitting process. Historically, these larger structures have lower elasticity and do not absorb seismic shaking which can potentially lead to catastrophic structural collapse.

Commonly, these structures are pre-1970 apartment buildings, office buildings, schools, hospitals, and warehouses. Due to the large and complex nature of these kinds of structural modifications, the timeline to retrofit is much longer. The first step is completing and submitting a checklist to LADBS within three years. The second step is determining the retrofit construction requirements within ten years. Finally, the third step is giving the owners an additional twelve years to perform the retrofits themselves. Following this process, building owners technically have until 2041 to comply with the retrofits. The costs can be much higher for retrofitting non-ductile concrete buildings, with estimates ranging from $100,000 all the way up to $2,000,000 or more.

2041 is a long time to complete mandatory repairs, so you may be asking, “How does this affect me as a property owner in the year 2020?” The answer can be found in an earthquake that occurred along the central coast of California in 2003. During this earthquake, two women working at a clothing store were fatally injured by falling bricks and plaster as they ran out of the building. Their families sued the property owner, and a jury awarded the families nearly $2 million, concluding that the property owners were negligent. The jury made this finding even though the building was in compliance with city law. As an owner of one of these soft-story or non-ductile concrete buildings, you should be aware of the potential for similar liability in the event of an earthquake, even if you are adhering to the timeline for repair.

If you are in a wood-framed or concrete structure built before 1980, your building may require retrofitting per Ordinance 183893. If you are unsure, the LADBS website has a search tool to identify if your building is one of those flagged to be retrofitted. It is especially pertinent for property owners and managers to know if their respective building is one of those identified by LADBS, so action can be taken quickly.

Expediting your building’s retrofit most importantly saves lives, and may ultimately save dollars and cents in case tragedy strikes.

Daniel Brown is the Special Projects Manager for PCL Construction Services Inc., located in Glendale, CA. The Special Projects department manages construction projects under $15 million in a variety of sectors, including Seismic, Aviation, Sports/Entertainment, and Higher Education. PCL Construction prides itself on being a trusted advisor and solution provider for a wide number of prestigious clients throughout Southern California. For more information on the seismic retrofit program, or how PCL Special Projects can help you build your vision and share in your success, please contact Daniel Brown at dabrown@pcl.com.