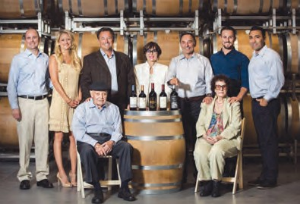 In 1910, Santo Cambianica left his home of Berzo San Fermo, located in the northern Italian province of Lombardia. After registering at Ellis Island, he arrived in New York and then traveled across the country to Downtown Los Angeles. He quickly became well known as an honest, hardworking and deeply devout Catholic, the very same qualities he was known for back home. It took only a few years of saving money, building his relationships, and planting his feet in the Italian-American community to start his own company and live the American Dream. In 1917, Santo founded the San Antonio Winery on Lamar Street.

Today, the L.A. River is paved and the vineyards have been replaced with businesses and homes. When Santo Cambianica passed away in 1956, he wished for his nephew Stefano Riboli to continue the business. The San Antonio Winery remains the oldest and largest producing winery in Los Angeles with 100 years of winemaking. The business is an essential component of the city’s cultural and historical landscape. In fact, in the early 1960s, the Los Angeles Cultural Heritage Commission designated the winery Cultural Monument Number 42. Still sitting on its original location on Lamar Street, the winery is the last vestige of the rich winemaking tradition of greater Los Angeles.

The winery has been honored with multiple placards from council members of the City of Los Angeles. Congressman Gil Cedillo lovingly referred to San Antonio Winery as a place of family gatherings and Sunday afternoons where Los Angeles comes to meet, enjoy its past and plan its future.