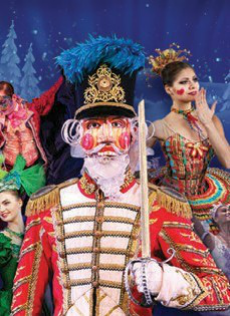 Built in 1932, the celebrated Pasadena Civic Auditorium has been a treasure of the Los Angeles arts and culture scene for over 85 years and welcomed millions of patrons across Southern California. The historic venue continues to sparkle hosting live performances, major television productions, cultural concerts, graduations and corporate events.

Lythgoe Family Panto returns to the historic Pasadena Civic Auditorium with their 10-year anniversary production of A Snow White Christmas, December 13-22, 2019. This is the third year in a row the production company will showcase a family-friendly musical at the venue. Last December, Lythgoe Family Panto produced The Wonderful Winter of Oz, featuring some of Hollywood’s most recognized actors.

Known for their creativity and involvement in television hits “American Idol” and “So You Think You Can Dance,” the Lythgoes are dedicated to bringing affordable theatre to families across America. Based on the Grimm fairy tales and others, each story has been modernized with topical scripts for parents and well-known pop songs for kids. The Lythgoes pride themselves on creating a memorable experience a family can share together.

The production will be directed by Bonnie Lythgoe and choreographed by Emmy Award winners Napoleon and Tabitha D’umo (NappyTabs), with book by Kris Lythgoe. The production has music supervision, arrangements, and musical direction by Michael Orland. Casting is by executive producer Becky Lythgoe and Andrew Lynford, CSA.

This Christmas season give your family the gift of Moscow Ballet’s Great Russian Nutcracker at the Pasadena Civic Auditorium on December 4, 2019. Step into a simpler time filled with sweet dreams and Christmas magic. With world-class artists, over 200 dazzling costumes, stunning sets, towering puppets and soaring birds, don’t miss your chance to ring in the holidays with this acclaimed Christmas extravaganza. Celebrate this cherished holiday tradition and relive the dream with Tchaikovsky’s timeless score.

For more information about the Pasadena Civic Auditorium and to purchase tickets to A Snow White Christmas or Moscow Ballet’s Great Russian Nutcracker, visit pasadenacivic.visitpasadena.com.