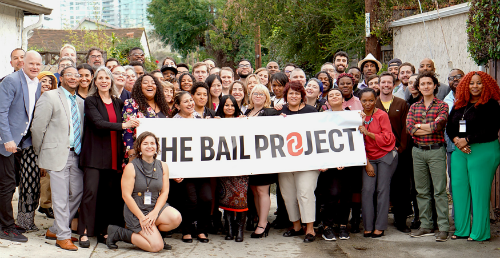 To combat mass incarceration by disrupting the money bail system – one person at a time.

The Bail Project provides free bail assistance to low-income people in Los Angeles and more than 20 other cities across the U.S.

What percentage of total revenue goes to cause (after operation expenses)?

100% of donations received through our website go directly toward paying bail for our clients.

What was your greatest community impact in 2020?

During the past year, as our nation has reckoned with the systemic forces that disadvantage Black and Brown communities in public health and criminal justice outcomes, ending cash bail has become—and must remain—a top priority. From conducting emergency bailouts in jails that were becoming COVID-19 hotspots to providing bail assistance for people arrested at demonstrations for racial justice, The Bail Project rose to the challenge. With a track record of over 14,000 bailouts in less than three years and experience in over 20 jurisdictions, The Bail Project will continue playing a leading role in this effort until systemic change is a reality and bailouts are no longer necessary.

The Bail Project is a national nonprofit on a mission to combat mass incarceration by transforming the pretrial system across the U.S. Our community-based teams work with local partners to pay bail for thousands of low-income people each year, reducing the human suffering caused by unaffordable cash bail, restoring the presumption of innocence, and building on the work of grassroots movements for decarceration.

In Los Angeles, we partner with the LA County Public Defender and UCLA Law’s Criminal Justice Program to provide free bail assistance to low-income residents. In addition to paying bail for our clients, we provide them with court date reminders, transportation assistance, and referrals to social service partners. We also collect data and stories to support advocacy and systemic reform. Through these efforts, we seek to transform pretrial justice for generations of Americans to come, bringing us one step closer to ending mass incarceration and racial and economic disparities in the U.S. criminal legal system.

Every dollar invested in The Bail Project’s National Revolving Bail Fund can be recycled: once a case is closed and bail funds are returned, we can reuse those funds to post bail for another client, approximately two times per year.

The Bail Project’s work is made possible thanks to the generous support of thousands of individual donors across the U.S. and around the world. This holiday season, you can give the gift of freedom – visit bailproject.org/losangeles and become a donor today!