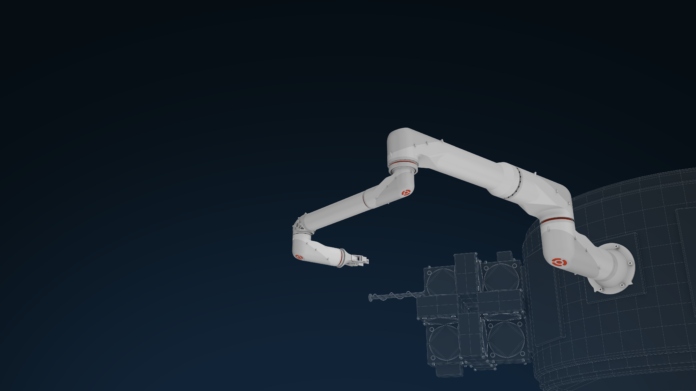 The xLink system, announced by Motiv on May 21, can help build large structures in space that cannot fit into a typical launch vehicle, according to co-founder and Chief Executive Chris Thayer.

“When you launch something, you’re constrained by the size and shape of what you can put in a launch vehicle. But if you can build it once you get up there, then you can change things dramatically and build much larger structures,” Thayer said.

XLink robotic arms can replace used satellite components with new ones to prolong service life for broken or aging satellites. They can also be used to remove orbital debris, or “space junk,” according to Thayer.

XLink is a modular, scalable system that Motiv can customize, he said.

“One company may need a very light-duty 1-meter robotic arm that we can put together with the modularity of xLink,” he said. “Another company or entity may need a 3-meter robotic arm. We can, basically, use the same parts and create that system out of the excellent architecture.”

Thayer said space robotic arm systems have been almost exclusively used in government-funded programs, but Motiv’s vision is to make space robotic arms available and affordable for companies and institutions of all sizes.

According to Thayer xLink costs up to 90% less than a “classical system,” meaning the type of system that might have been used previously by a government agency.

Delivery time for a customized xLink robotic arm system can be as short as six months, the company said.

Motiv plans to deliver the first xLink unit for Made In Space Inc., a Florida-based company that specializes in space manufacturing, at the end of this year, Thayer said.

Prior to developing xLink, Motiv was contracted by NASA in 2015, one year after Motiv’s formation, to develop the primary robotic arm for the Perseverance rover to perform tasks in the agency’s Mars 2020 mission.

The main job for the rover is to seek signs of ancient life and collect rock and soil samples for an attempted return to Earth.

Motiv developed a 2-meter robotic arm to extend the rover’s reach and collect rock samples for study. NASA said the mission is due to launch between July 17 and Aug. 5.