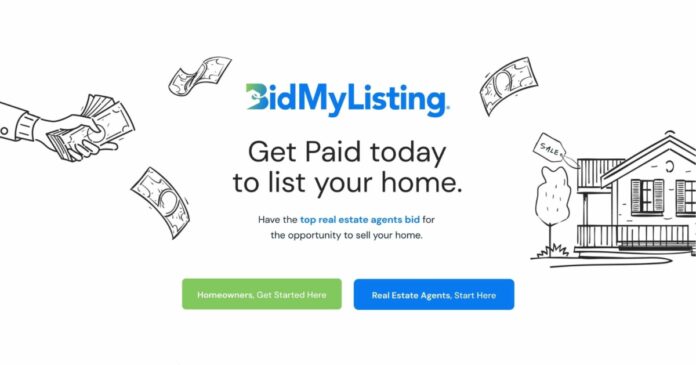 Top residential real estate agent and TV show personality Josh Altman is launching BidMyListing.com, a digital marketplace to connect homeowners and agents and improve the process of selling a home for both. Altman has an office in Beverly Hills.

The Altman Brothers – Josh and Matt – are stakeholders of BidMyListing and co-founders.
Matt Proman is the founder and chairman of the new company, based in Newport Beach.
The site officially launched in May.

BidMyListing was launched using $725,000 in seed funding, and in April closed on $5 million in funding from Deer Park Road. The company’s principals said plans for another fundraising effort were on the table.

The idea behind the website is simple: create a system where an agent has “skin in the game” when it comes to home listings, Altman said. That means money beyond just commissions on the line.

BidMyListing does this by having agents literally bid on listings.
Here’s how it works: Sellers post information about their home on the site, and agents then bid on the listing and provide information on how they would plan to sell the home.”
Once the seller selects a winning bid, the agent and the seller have 72 hours to meet, at which point the two walk the property together, agree on a list price and sign a listing agreement. At that point, the money from the bid is released to the seller.

“It’s the first time ever a seller will get upfront money,” Altman said.
The money is not given directly from the agent to the seller but rather goes through BidMyListing. The company takes a 20% cut of the bid.

Altman said the process is designed to give a homeowner peace of mind that the agent is working hard for them since they have their own money on the line.
It’s also a way for sellers to hear from a lot of different agents on how they would go about selling the home.

“There is a major issue in the real estate community with agents who go out there and all they try to do is getting listings and that’s it,” Altman said. “They collect listings and wait for the phone to ring, especially in a hot market like we’re in now. And homeowners, when it’s not a hot market, get frustrated when things aren’t getting done. This is the first tech property platform that helps both the home seller and the agent.”

Altman said BidMyListing would not end up costing agents more money and should be looked at as a relocation of funds that are currently used on other marketing ploys.
“The marketing spend of agents every year is billions of dollars to market themselves to try to get listings,” Altman said. “What we’re asking agents to do is not spend more money but take some of that marketing spend they spend on bus ads, magazines … and take some of that spend and go buy a listing.”

Altman said the site could help new agents have a shot at bigger listings. In the first six months of his career, Altman said he sold zero homes and added that platform like this “would have changed my life.” He hopes both young and veteran agents take advantage of the site.

He thinks BidMyListing will be used for both high-end and lower-end homes around the country. He is already seeing interest from people nationwide: more than 100 sellers have placed their homes on the site, and 6,000 agents have registered to bid on listings.

“My favorite thing about this is that it’s a disruptor, it’s something that I think is going to change the game and is going to ruffle feathers,” Altman said.
While the site is in its early stages, Altman expects it to grow rapidly.
“This is going to be a unicorn company very quickly,” he said.