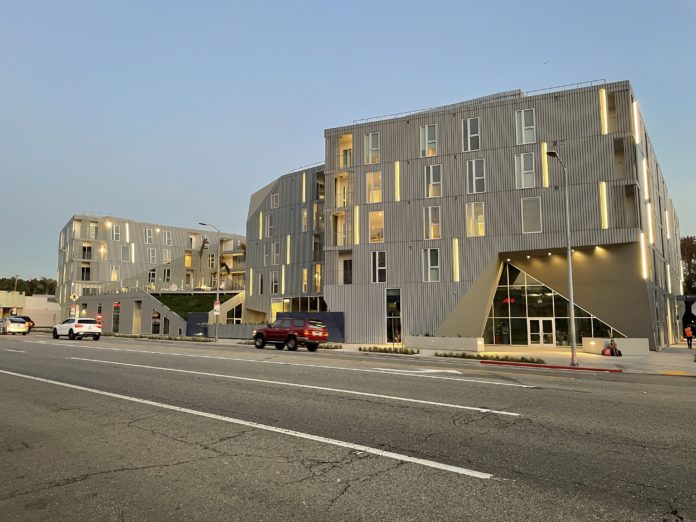 Mid-Wilshire-based CIM Group has sold a 153-unit apartment building in West Los Angeles. The sale price was not disclosed.

The building, which is located at 1500 S. Granville Ave., has 15,000 square feet of ground floor retail and 308 parking spaces. It has studio, one-bedroom, two-bedroom and live-work units, including 16 affordable housing units.

Earlier this year, CIM Group also sold a nearby 147-unit multifamily site and an adjacent collection of 37 apartments. The name of the buyer and financial terms of the deal were not disclosed.
That property, Elevate, has 147 units and is located at 1515 S. Granville Ave. It has retail space and 16 affordable housing units. CIM developed the building in 2019 on the site of a former auto dealership.

CIM Group has had a busy year. Earlier this year, the company purchased a 2,346-unit apartment property in Alexandria, Va., for $506 million.

It was the highest-priced multifamily transaction ever in the Washington, D.C. area, according to CoStar Group Inc.

And in June, CIM Group backed out of a deal to purchase the 869,000-square-foot Baldwin Hills Crenshaw Plaza at 3650 W. Martin Luther King Jr. Blvd. following protests from the community. The acquisition had been announced in April.

The Macy’s Inc. and IHOP Restaurants location at the center were not included in the sale.
Community opposition to the Crenshaw Plaza deal largely fell into two categories: alleged ties to President Donald Trump and his son-in-law Jared Kushner, and plans to redevelop the center.
CIM considered adding creative office space to redevelop the property and said community concerns with the redevelopment were not based on CIM’s plans for the center.

CIM Group, which was founded in 1994, has delivered more than $60 billion in real estate and infrastructure projects.