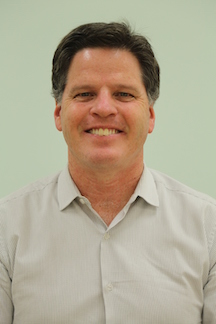 Michael Flood has served as the Chief Executive of the Los Angeles Regional Food Bank since 2000. During his tenure, the Food Bank has started new programs to increase food distribution and launched new nutrition and public policy initiatives. A Los Angeles native, Michael has been in food banking since 1990 working previously for the Redwood Empire Food Bank and the Food Bank of Contra Costa and Solano.

Michael serves on the Board of Directors of several organizations including as Board Chairman of Nourish California, Board Chairman of Emergency Network Los Angeles, and Treasurer of the LA Food Policy Council. In 2016, Michael was appointed by LA County Supervisor Hilda Solis to serve on the Public Social Services Commission. Michael is also a member of the LA-5 Rotary Club and the LA World Affairs Council & Town Hall.

Michael earned his MBA and BA degrees from the College of William and Mary in Virginia where he was an All-American soccer player.

The Los Angeles Regional Food Bank has been mobilizing resources to fight hunger in Los Angeles County since 1973. To support the Food Bank’s vision that no one goes hungry in Los Angeles County, food and grocery products are distributed through a network of 700 partner agencies and directly to those in need through Food Bank programs. The Food Bank has distributed more than 1.7 billion pounds of food, the equivalent of 1.35 billion meals, since 1973. The total value of food and grocery products distributed since the Food Bank’s inception is $2.3 billion. In response to the COVID-19 pandemic, the Food Bank tripled the number of people helped, and now reaches 900,000 people every month. The Food Bank is a 4-star rated charity by Charity Navigator. For more information, visit LAFoodBank.org.