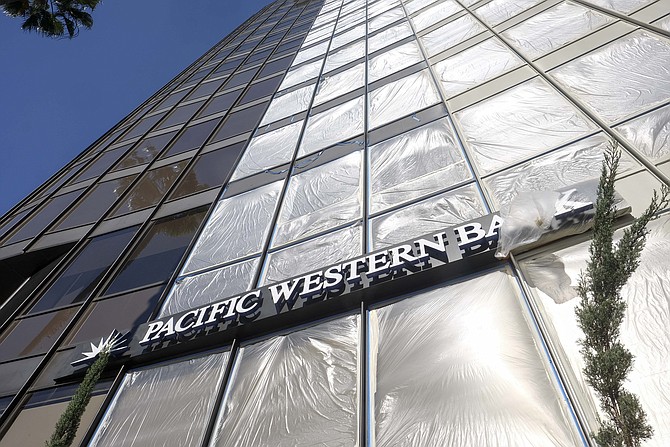 Pacific Western dipped its toe back in the acquisition market after its two-year hiatus. Photo by Ringo Chiu

So much for the end of the world.

After more than a year of pandemic-driven precautions, including setting aside tens of millions of dollars in reserves to cover potential credit losses, Los Angeles-area banks are breathing a huge sigh of relief.

Most showed record lending levels, all-time highs in deposits and balance sheets flush with cash in their first-quarter financial reports.

The banks are also reversing reserves they’d set aside during the Covid-19 pandemic for leveraged commercial office loans.

“The reserves are still elevated, but they’re not as high as they were at the height of the pandemic,” said Ariste Reno, a managing director and credit risk expert based in the Chicago office of global consulting firm Protiviti Inc.

Now, as the pandemic recedes in California, the industry’s focus is shifting to merger mania.

Deal-making is heating up after a hiatus of more than a year, and some say pent-up demand could bring an eye-popping pace for transactions in the second half.

“I’ve never seen anything like this since I began my career in 1984,” said Robert Franko, chief executive of Cerritos-based First Choice Bancorp, who last month sold his institution to Missouri-based Enterprise Financial Services Corp. in a $397.7 million stock deal.

Local banks are doing deals to carve out business lines from other institutions, while out-of-state banks like Enterprise Financial are stepping into the affluent Southern California market.

Credit unions also are getting in on the action and are said to be scouring the L.A. market for banks to acquire.

That trend began showing up on financial radar screens in California just prior to the pandemic, according to Michael Bell, partner and co-chairman of the financial institutions practice group at Michigan-based Honigman.

Bell declined to identify the credit unions or their commercial bank targets. If the deals close, they would be the first in the state, he said.

“The pandemic happened, and no one wanted to do anything. Now we’re coming out of the pandemic, and these institutions didn’t get hurt, and their fears and predictions were wrong, and now they are ready to deal,” Bell said.

The deals are always cash because credit unions are not publicly traded and do not offer stock considerations.

Another trend emerging in the L.A. area is banks bolting for other states to escape high corporate taxes and red tape. The latest example surfaced in May when Pasadena-based fintech firm Green Dot Corp. announced plans to move its headquarters to Austin, Texas.

Irvine-based First Foundation Inc. announced on its 2020 fourth-quarter earnings call with Wall Street analysts on Jan. 26 that it was moving its bank headquarters to Dallas, though it would leave a huge wealth management presence behind in Orange and L.A. counties and elsewhere throughout the state.

“It is a very vibrant market in Southern California, but the reality is, I feel like in the banking world today, you need to be kind of geographically dispersed,” said First Foundation Chief Executive Scott Kavanaugh.

“When I started looking at the landscape about where would we be geographically, if I wanted to diversify out of California, it became pretty evident that the two biggest recipients were Florida and Texas,” he added.

Kavanaugh bought a house in the Dallas area last fall after the decision was made to move the headquarters. Then in early June, First Foundation agreed to buy Naples, Fla.-based TGR Financial Inc. in an all-stock transaction valued at $295 million.
“We are a wealth management platform, and when you look at where you could possibly be across the country, I’m not sure there’s a better area than Naples, outside of Beverly Hills, and you know we’ve got a presence very close to there.”

Despite ongoing challenges posed by the pandemic in the first half of 2021, acquisition activity has been robust among banks in the L.A. area.

In February, Phoenix-based Western Alliance Bancorp, a $35 billion-in-assets institution that already has a strong presence in L.A. through its Alliance Association Bank subsidiary, paid $1 billion in cash for AmeriHome Mortgage Co. The Thousand Oaks-based company acquires and services mortgages.

In March, Santa Ana-based Banc of California, after agreeing to buy local rival Pacific Mercantile Bancorp in a stock transaction valued at $235 million, disclosed plans to establish a significant corporate presence in the L.A. market, starting with new digs in Brentwood that will serve as a base to pursue more L.A. business.

The new institution is the largest Black-led bank in the United States. With more than $1 billion in assets, CityFirstBroadway accounts for nearly one-fifth of the more than $5 billion held last year by Black-owned financial institutions.

Koreatown-based CBB Bancorp Inc. said April 30 that its planned acquisition of Ohana Pacific Bank is on pace to be finalized in the second half of 2021. The $24.8 million transaction will expand CBB’s presence to Hawaii, where Honolulu-based Ohana operates two branches.

In May, Chinatown-based Cathay General Bancorp, the parent of $19 billion-in-assets Cathay Bank, agreed to buy 10 of HSBC Bank USA’s branches in California as well as select loans and deposits.

“I think that the M&A market will be robust. I think there was a flurry of deal-making at the end of 2020, but I think going forward into 2021, you’re going to see that it could be a good year for M&A activity,” Protiviti’s Reno said.

In the first quarter, banks began reversing millions of dollars in reserves they had put aside to cover potential credit losses after those losses failed to materialize during the pandemic.

The reversals are buried throughout first-quarter reports.

PacWest said it reversed $58 million in the first quarter of 2021. East West didn’t record any provision for credit losses in its first quarter, compared with a provision of $24.3 million in its 2020 fourth quarter.

Protiviti’s Reno warns that the PPP program could be masking some yet to be identified credit risks — even holding up some M&A activity as a result.

“Given the pandemic conditions, it might not be as clear as to what certain loans are rated,” Reno said.

Due to double-digit unemployment rates during the pandemic, many banks are raising wages to retain workers.

Last month, Bank of America announced plans to raise the minimum hourly wage for its U.S. workers to $25 by 2025. In addition, it unveiled plans to require all vendors to pay employees dedicated to the bank at least $15 an hour.

Bank of America has 5,500 full-time employees across Los Angeles.

“This is just another way to recruit the best talent and start a long-term career at Bank of America,” said Raul Anaya, Bank of America’s top banking executive in the region and head of the institution’s business banking line.