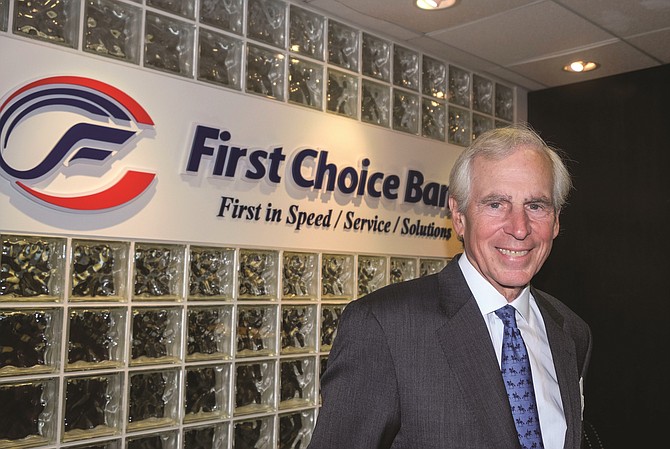 But as the economy began coming back to life in January and merger activity began to resume in the banking sector, Franko started taking phone calls and scheduling Zoom meetings with investment bankers.

In May, First Choice agreed to be acquired by St. Louis-based Enterprise Financial Services Corp. in a $397.7 million stock deal. Franko’s longtime friendship with Rick Sanborn, the former head of San Diego-based Seacoast Commerce Banc Holdings, helped spur the deal, which was first raised when Sanborn had a casual conversation with First Choice Chairman Peter Hui over Italian sub sandwiches in Las Vegas earlier this year.

That was followed by more serious conversations between senior executives at Enterprise and First Choice, which has $2.5 billion in assets.

Enterprise, which has $10.2 billion in assets, wasn’t the only suitor, according to a regulatory filing from First Choice earlier this month. Three other banks showed interest before Enterprise and First Choice announced the transaction.

“Our bank was never for sale, but it just so happened that we were a very good cultural fit, and Enterprise wanted to expand to the West Coast,” Franko said.

Franko, a veteran of Southern California banking, sat down with the Business Journal to discuss M&A bank activity, competition and the effects of the pandemic on banking.

Who are the unidentified companies that tried to buy First Choice? Are they headquartered in Southern California?
No, the SEC document has to speak for itself. If I say anything outside of that, I would have to file an amendment, which would cost about $1,000 worth of high-priced lawyers running around like chickens.

How did all of these banks come to show interest in buying your bank?
Let me give you a little color on how this happens. There are a whole lot of investment banking firms, and their people come by regularly. During the pandemic, we’d talk on a Zoom call or the telephone. Before the pandemic and since the pandemic, people have been starting to come by again. What they typically say is, “You know, have you ever looked at the possibility of buying any of these banks?” And they show 10 potential candidates that we could buy, or be a seller. Then they’d ask you what you think about merging with one of those banks or acquiring a bank. It’s like going to lunch at a Chinese restaurant with an a-la-carte menu.

You weren’t exactly hanging out a for-sale sign, right?
Yeah, but on the flip side, as a fiduciary, it means you have to put your individual interest behind the interests of your shareholders. So, if an investment banker came in and said, “We know someone who is interested in buying your bank, and it will be attractive to shareholders, we understand that they’re very interested,” it’s then incumbent upon us to notify the board. We need to talk to these people and see if there’s serious interest.

Was 2019 the first time your bank started to receive strong nibbles?
Yeah, but I wouldn’t necessarily say strong nibbles, but some nibbles.

What’s causing this new wave of consolidation?
Banks have been consolidating for the last 30 years. When I got into banking in 1984, there were 15,000 banks in the United States. Today I think there are roughly 5,000. Every year, the number of banks is reduced by roughly 5%, although that hasn’t been the case recently because of the pandemic. So, if the math were to hold, there were about 250 banks that were merged out of existence every year. The same thing was scheduled to happen in 2020, but if you remember when the pandemic first started, there was a chicken-little-sky-is-falling belief that the entire economy was going to go upside down, and with good reason. When you turn off the motor of the world, you put tremendous pressure on the economy. With the pandemic, the end of the world didn’t happen. And now that it’s 2021, buyers are looking around and saying, “Well, maybe we should start buying again.” So, you have pent-up demand from last year.

How did you know the culture would work between First Choice and Enterprise?
Enterprise is a commercial relationship bank. Now what do I mean by that? Many banks originate loans as transactions. Relationship banks don’t do that. Before we will originate a loan, we want to have a deposit relationship with the client. So, now there are some exceptions to this, but for the most part, if you’re going to be one of our clients, we want your deposit business first. And then, if you’re going to bank with us, we’ll be glad to look at your credit needs, revolving line of credit, real estate transactions, things like that. Enterprise has exactly the same philosophy. They look for relationships.

What is driving M&A right now in the banking industry?
I think it’s consolidating again — to reduce costs, and there’s less of a need for a brick-and-mortar footprint. It’s easier to do acquisitions these days, and consolidate and actually realize savings from the consolidation. It’s hard to hire good people. So, when Enterprise buys our bank, they come and look at our people, especially the relationship people, and they can tell right away somebody has built up this kind of business over five, seven or 10 years. Those are people you want to keep, and it would take you forever to go out and get an executive recruiter, hire those people, put together their teams and make it work. But if you buy a bank, you get all that comes with it.

How much is investment in digital technologies driving M&A?
I think it makes a big difference. You don’t need to go to the branch for anything. All banks have a backend system which processes daily banking transactions and posts updates to accounts and other financial records. Core banking systems typically include deposit, loan and credit-processing capabilities with interfaces to general ledger systems and reporting tools. We pay a lot of money for that technology, and Enterprise pays a lot of money for that technology. But if we merge the two together, after the two backend systems are merged together, we pay a lot less than what we owe on a stand-alone basis.

What asset size of banks in Los Angeles County are feeling pressure to consolidate?
I would guess virtually any bank that’s three or four years old is looking either for a buyer or to become a seller. The rule of thumb is if you’re going to do an M&A transaction, then you want something that’s big enough to move the meter.
You are seeing more of this happening lately. I mean are you starting to hear rumblings in the marketplace. I’ve not seen this kind of activity before, and I’ve been around for, like, 30 years.

Can you put the pace of M&A activity in perspective?
Everyone anticipated this because there was pent-up demand from last year. So, if my simple math is right, last year we should have had 250 mergers, and this year we should have 250 mergers. But last year, we only had 112. So that means this year, we’re probably going to have about 400. Most of those mergers are going to happen in the second half of this year. We’ve had roughly 70 announced year-to-date (according to S&P Global Bank), so this means we have 300 to 400 more coming in the next six months.

A lot of banks have been reversing their credit loss reserves as the economy heals. Have you done that?
We haven’t reversed any of our reserves. Our view is we’re not out of the pandemic yet. We’re getting close, so one or two more quarters and everything should be fine. We have a reserve, but we have taken the position that, you know, until we get out of the pandemic, even though we have never used one dollar in the reserve, it’s still there. By the end of the first quarter, the sun was out, the economy was recovering, and GDP was going upward, and unprecedented unemployment was going down. All of these banks expected future losses, but they just never came. So, they had to reverse the credit loss back out.

How did the Paycheck Protection Program impact your bank?
We had 700 PPP loans that totaled $442.7 million in round three for the quarter that ended March 31. Between round one and round two last year, we received almost 2,500 new loans for $600 million under the Paycheck Protection Program, and virtually all of that money was deposited in our bank. That volume was among the most in the nation. Many of those PPP loans were for our own clients, of course, but we also did it for a lot of new clients who opened deposit accounts with us. A lot of new, loyal clients were developed that way.